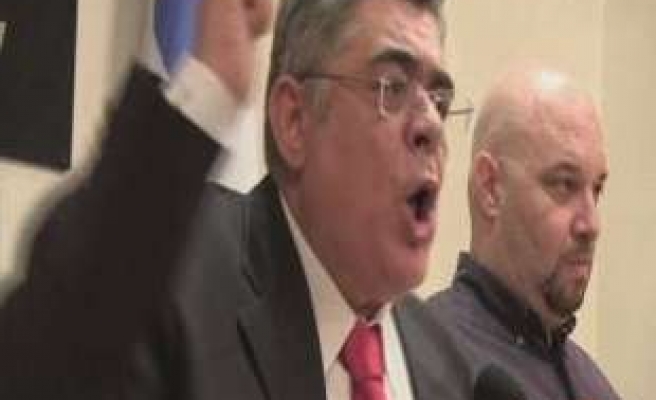 Lawmakers and members of the far-right Golden Dawn party arrested on Saturday on charges of being part of a criminal organisation will get a fair trial, Greek Justice Minister Haralambos Athanassiou said.

"Democracy in Greece is strong," the minister said after meeting Prime Minister Antonis Samaras and Public Order Minister Nikos Dendias. "All those arrested will have a fair trial."

Greece's finance minister played down the risk of political instability after police arrested the leader of the far-right Golden Dawn party, two of its lawmakers and party members on Saturday.

"There is no risk of destabilisation," Yannis Stournaras told reporters after a meeting in which Prime Minister Antonis Samaras briefed Greece's European Union and International Monetary Fund lenders on the crackdown against the party.

Senior Golden Dawn members, including its leader, were arrested on Saturday in the biggest crackdown against a political party in Greece since the fall of a military junta in 1974.

ΕΛΕΥΘΕΡΙΑ Ή ΘΑΝΑΤΟΣ! (Live Free or Die)ΛΕΥΤΕΡΙΑ ΣΤΗ ΧΡΥΣΗ ΑΥΓΗ! (Free Golden Dawn)What goes around, comes around. Golden Dawn is the third largest political party in Greece and growing rapidly. They are forecast to sweep the upcoming Athens municipal elections. This fascist move by the Greek Government seems to be a panic-stricken reaction to the fact that they will soon be out of office!