Greece votes on whether to dump austerity, take on lenders

European leaders eye the results fo the elections closely as a Syriza victory may generate a clash with the Troika -- the EU, European Central Bank and the IMF -- which could possibly start a new crisis between the nation and its creditors, with the euro in the balance. 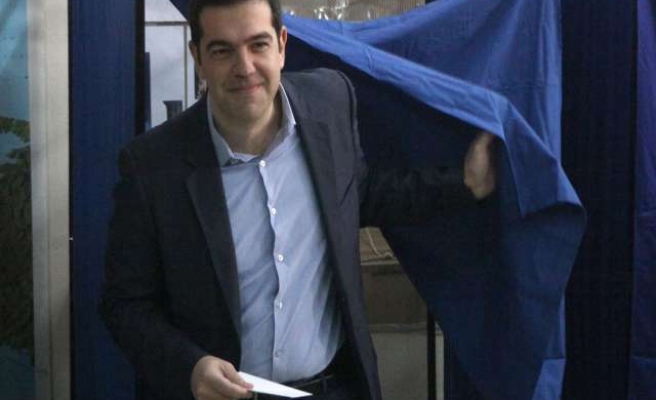 Greeks voted on Sunday in an election expected to bring to power the radical leftist Syriza party, which has pledged to take on international lenders and roll back painful austerity measures imposed during years of economic crisis.

Barring a huge upset, Syriza, which has led opinion polls for months, will be the biggest party and aims to form the first euro zone government openly committed to cancelling the austerity terms of its EU and IMF-backed bailout programme.

"In Greece, democracy will return," the party's 40-year-old leader Alexis Tsipras told a throng of cameras as he voted in Athens. "The message is that our common future in Europe is not the future of austerity."

A Syriza win would represent another turning point for Europe after last week's announcement by the European Central Bank of a massive injection of cash into the bloc's flagging economy after years of trying to clamp down on budgets and pushing countries to pass structural reforms.

Polls close at 7 p.m. (1700 GMT), with 9.8 million Greeks eligible to vote. An exit poll is expected immediately after voting ends, with the first official projections due at 9.30 p.m. with results updated into the night.

While Syriza is expected to form the biggest group in the 300-seat parliament, it is unclear if it will be able to govern alone or have to form a coalition with a smaller party.

Final polls on Friday gave the party a lead of up to 6.7 points with 31.2-33.4 percent of the vote, slightly under the level needed for an outright victory.

However the final result could hinge on whether it can convince enough voters that it can keep Greece on a sustainable course, with many wary of idealistic promises.

"I voted for a small party to force them all to collaborate, get us back to growth and keep us in the euro," said Christos Mousouris, 52, a civil engineer. "People should be realists and not believe in fairy tales."

Syriza appeared to be widening the gap in the final days of campaigning over the centre-right New Democracy party of Prime Minister Antonis Samaras, who appealed to undecided voters to ensure Greece stays on the path of stability and reforms.

"Today we are deciding if we move ahead with power, safety and confidence or if we get into an adventure," Samaras said after voting in the western Pelopponese region.

After its most severe crisis since the fall of the military junta in 1974, Greece's economy has shrunk by some 25 percent, thousands of businesses have closed, wages and pensions have been slashed and unemployment among youth is over 50 percent.

At the same time, its massive public debt has climbed from 146 percent of gross domestic product in 2010 to 175.5 percent last year, the second highest in the world.

Greece's economy last year emerged from recession for the first time in six years and unemployment has begun to come down slightly, but it may be years before the country recovers.

Tsipras' campaign slogan "Hope is coming!" has resonated with austerity-weary voters, despite Samaras' warnings that a Syriza government could bankrupt Greece.

"We can't take more austerity," said 47 year-old civil servant, Maria Avrami, who said she used to vote for the centre-left PASOK party which shared power with New Democracy in the outgoing government. "I hope Syriza gets a high vote to be strong enough to negotiate with the Europeans," she said.

Renouncing much of the firebrand rhetoric that was once his hallmark, Tsipras has promised to keep Greece in the euro and dropped threats to "tear up" the tough requirements of its 240 billion euro bailout.

He has promised to renegotiate a deal with the European Commission, ECB and International Monetary Fund "troika" and write off much of Greece's 320 billion-euro debt, despite clear signs from partners including Germany that they would refuse.

Financial markets have been on edge ahead of the elections, although the ECB's massive bond-buying programme and growing confidence that a Syriza-led government could compromise with its creditors boosted confidence last week.

Syriza would need around 40 percent of the vote to be guaranteed a majority but it could win with less depending on how well other parties perform.

If not, it may need to form a coalition with a small party such as the centrist To Potami, the centre-left PASOK or the anti-bailout Independent Greeks or form a minority government, relying on ad-hoc support from other parties.

Syriza officials have said they would seek a six-month "truce" whereby the bailout programme due to end on Feb. 28 would be put on hold while talks with creditors begin.

But they face stiff resistance from the rest of Europe over demands for a debt write-off, raising the spectre of Greece being forced out of the euro if no agreement is reached.