Greek triple jumper Paraskevi Papachristou was withdrawn from the London Olympics on Wednesday after causing an uproar at home for a tweet slammed as racist, the Greek Olympics team said. 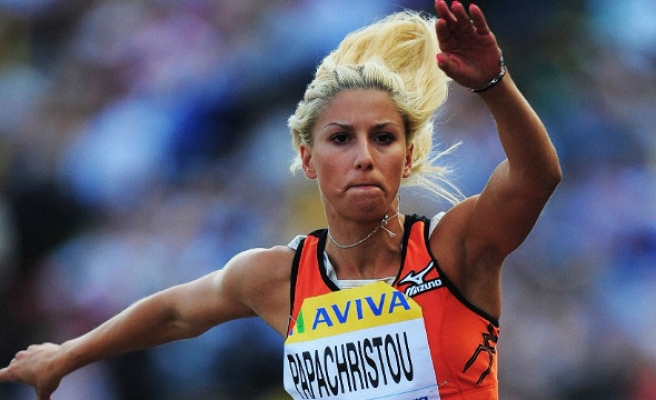 Greek triple jumper Paraskevi Papachristou was withdrawn from the London Olympics on Wednesday after causing an uproar at home for a tweet slammed as racist, the Greek Olympics team said.

"With so many Africans in Greece... the West Nile mosquitoes will at least eat homemade food!!!" she had posted on her Twitter account.

The country's Olympic Committee said she was being pulled from the team because her comments were against the Olympic spirit.

"She showed no respect for a basic Olympic value and unfortunately she is out," Greek mission chief Isidoros Kouvelos told SKAI TV. "She made a mistake and in life we pay for our mistakes."

The 23-year-old, who was scheduled to leave for her first Olympics next week, later apologised for what she said was "an unfortunate and tasteless joke" that she first saw on Facebook and that did not reflect her beliefs.

"I am very sorry and ashamed for the negative responses I triggered, since I never wanted to offend anyone," Papachristou, a blonde-haired athlete who sports a navel piercing, wrote on her Facebook page in Greek and English.

"My dream is connected to the Olympic Games and I could not possibly participate if I did not respect their values."

The Athens-born athlete was a long shot for a medal with a season's best of 14.58 metres, almost half a metre behind the world leaders.

Papachristou's coach attacked the decision to expel her, saying it was too harsh a sanction for someone who had already apologised.

"It's too much, the penalty should not have been so strict," George Pomaski told Reuters.

"This is a big disappointment not only for her but for her family and for myself and anyone involved in the Greek team."

One man has died in a small outbreak of the West Nile virus in Athens this month and at least five other cases have been reported, Greece's disease control and prevention body said.

Greece is sending 105 competitors in 16 sports to the London Olympics beginning on Friday.

This is not the first time athletes have triggered the ire of their Olympic committee for comments on social media sites.

Australian swimmers Nick D'Arcy and Kenrick Monk were slapped with a social media ban in June and will be sent home immediately after their Olympic events as punishment for posting photos of them toting firearms on Twitter and Facebook.

The 24-year-old swimmers apologised after being slammed by anti-gun groups in Australia and took down the photos.

"You're always going to have that one spoiled egg who's going to ruin it, try to ruin it, for everyone. And it's a good idea to get rid of that spoiled egg," American Greco-Roman wrestler Justin Lester said.

British Badminton player Imogen Bankier added: "I did actually see that, on Twitter ironically enough. The thing is you have to be careful with the social media side of things -- certainly the decision to tweet or not tweet, and certainly what you say. I mean that wasn't, doesn't sound very smart."

Papachristou finished 11th in last month's European championships in Helsinki with a jump of 13.89 and failed to make the final in the 2011 world championships.

In 2009 she qualified for the final of the European indoor championships with the second-longest jump but then failed to register a jump in the final.