Police have staged 13 raids on Golden Dawn offices over the past few days, the party's newspaper said on its website 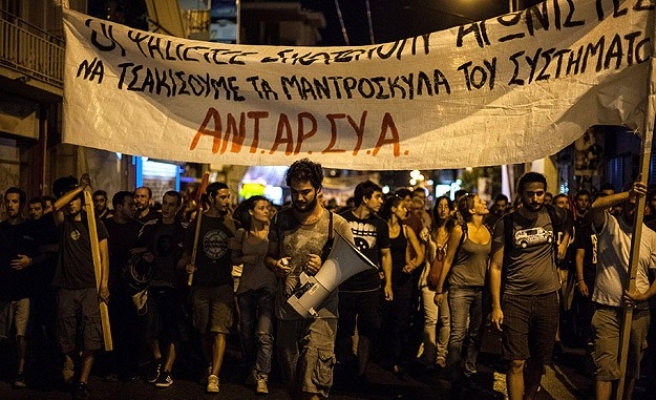 A man linked to Greece's far-right Golden Dawn party appeared in court on Saturday charged with stabbing an anti-racism rapper to death, a killing that has triggered protests and raised social tensions across the debt-wracked country.

The 45-year-old man wore handcuffs and a bullet-proof vest as police brought him to the closed session with magistrates in Piraeus who detained him pending trial.

About 2,000 protesters waved banners and shouted anti-fascist slogans about 5km (3 miles) away in the western Athens suburb of Nikaia, close to where the rapper Pavlos Fissas was killed on Tuesday.

Golden Dawn - Greece's third-most popular party, which has a Swastika-like emblem - says it had nothing to do with the killing and has accused the government and media of a "witch-hunt" to rob it of votes.

But Greek authorities have said the suspect had acknowledged being a Golden Dawn sympathiser, and on Saturday he told the court he had a "loose" connection with the party, according to court officials.

The man said he had acted in self defence, the officials told Reuters. He had earlier been charged with voluntary manslaughter and possessing a weapon, they added.

After the murder, prosecutors and an anti-terrorism police unit started investigations into whether the party was a criminal organisation involved in a string of violent attacks over the past two years, officials said.

The government has also asked judges to look into whether there was any link between the party and the killing.

Police have staged 13 raids on Golden Dawn offices over the past few days, the party's newspaper said on its website on Saturday. "They have found absolutely nothing," it added.

Calls to ban Golden Dawn have grown louder since the killing, although citizen protection minister Nikos Dendias said that move would need a change to the constitution, a process that would take years.

"The time may have come to debate that possibility, in view of a constitutional revision," Dendias told newspaper Realnews.

Police said they arrested five members of the party in the northern port city of Thessaloniki on Saturday for carrying batons and knives.

Golden Dawn rode a wave of popularity during the height of Greece's financial crisis, winning support with free food handouts for Greeks and fierce anti-immigrant rhetoric.

But a poll by Metron Analysis for Sunday's Ethnos newspaper, taken immediately after the stabbing, showed Golden Dawn's support down by 1.5 percentage points to 7 percent.

Sixty-one percent of respondents said their view of Golden Dawn deteriorated after the killing, according to a MRB/Realnews poll. But only 30 percent in the MRB poll were in favour of an outright ban of Golden Dawn.