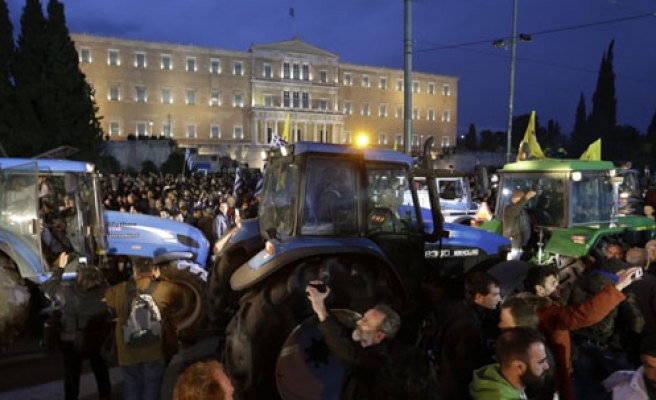 Thousands of demonstrators gathered in Athens on Saturday in solidarity with farmers who have blocked dozens of highways and border crossings in recent weeks in protest over a pensions overhaul.

More than half were members of the communist-leaning Pame trade union, offering support for the huge wave of farmers who arrived in Athens from the countryside Friday to protest against the reforms.

On Friday evening, around 10,000 protesters waving black flags, including thousands of farmers, marched through Athens behind a column of tractors blaring their horns.

Earlier Friday, protesters had clashed with police in front of the agriculture ministry and on a motorway outside the city.

Vowing to keep up the protests throughout the weekend, dozens of farmers spent Friday night camped out in Syntagma Square, lighting a fire in front of parliament.

The farmers are angry about government plans to increase their social security contributions as part of pension reforms demanded by Greece's creditors in exchange for a third massive bailout agreed last year.

Widespread opposition to the reforms has led to the rare sight of professionals marching alongside blue-collar workers in recent weeks, a phenomenon that has been dubbed the "necktie movement".

Farmers also reject plans to scrap benefits such as cheaper fuel and double their income tax by 2017 as the debt-wracked Greek government tries to replenish its coffers.