After the Greek PM says at UN that global development is impossible without debt restructuring, opposition in Greece points out Tsipras' 'inconsistency' 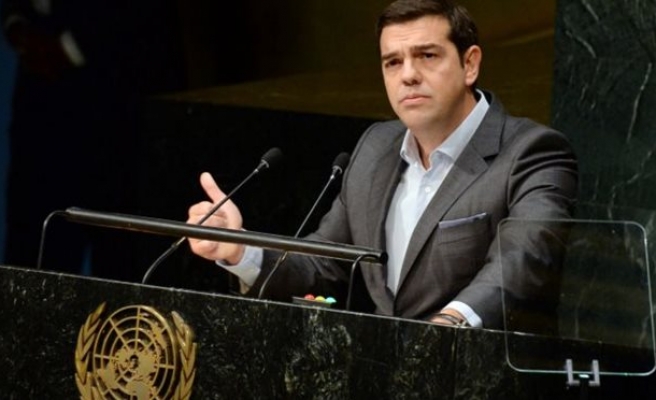 Greek opposition parties have slammed Prime Minister Alexis Tsipras for urging debt restructuring during his speech at the United Nations in New York.

In his speech on Monday, Tsipras declared that global development was not possible without addressing debt restructuring. He called on world leaders to learn from the experience of Greece which faced not only an economic crisis but also a security and refugee crisis, simultaneously.

After his party Syriza won the elections last week, Tsipras’ coalition government refocused on implementation of a series of harsh austerity measures. Their progress is set to be evaluated by international creditors in October.

“Historical experience shows that the debt restructure is necessary for development even for developing countries like Germany of 1933,” Tsipras said. “We cannot talk about sustainability and growth without talking about the debt,” he tweeted after his speech.

Tsipras’s speech at the UN is said to be part of a broader goal by his administration to internationalize Greece’s debt problem. Attracting investors is another goal for the Greek government. At the annual Clinton Global initiative on Sunday, Tsipras said: “It is necessary to make reforms in taxation, in the public administration and to create a friendly environment for investments. The message to investors is that they are welcome in Greece,” adding that the discussion about Grexit (or Greece's exit from EU) was over.

Tsipras’ words at the UN were, however, not welcomed by opposition parties in Greece.

“Mr. Tsipras should know that most of the Greek public debt is in the hands of our official creditors in the EU and IMF [International Monetary Fund].  Does he ignore what he has signed?” the party said in a statement. Tsipras was also accused of intensifying uncertainty and damaging the country with his alleged inconsistency.

Socialist Pasok party also criticized Tsipras. “His presence in the U.S.A. marked an unexploited opportunity. As for the debt, there is nothing new. Only wishes and generalizations,” it said.

The socialist and liberal Potami party also accused Tsipras of being inconsistent and pointed out that many of Syriza’s members had been using anti-reform language for years.

The Greek Communist Party also chimed in, warning that Tsipras was now trying to convince Greeks that debt restructuring would reverse poverty and unemployment after he signed an €82 billion bailout agreement in July.

Meanwhile, on the sidelines of the UN’s General Assembly in New York on Monday, the Greek premier met with Brazil’s President Dilma Rousseff and Ecuador's President Rafael Correa, according to Athens-Macedonian Press Agency.

Tsipras also spoke by telephone with the head of the Organization for Economic Cooperation and Development, Angel Gurria, who is offering Greece technical advice on economic reforms, according to Kathimerini newspaper.