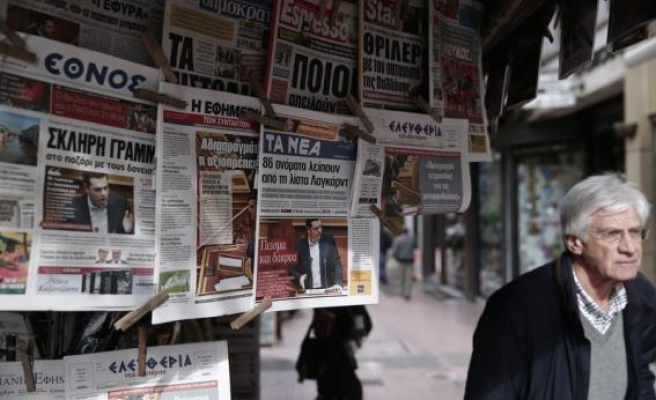 Leftist Prime Minister Alexis Tsipras laid out plans on Sunday to dismantle Greece's "cruel" austerity programme, ruling out any extension of its international bailout and setting himself on a collision course with his European partners.

In his first major speech to parliament since storming to power last month, Tsipras rattled off a list of moves to reverse reforms imposed by European and International Monetary Fund lenders: from reinstating pension bonuses and cancelling a property tax to ending mass layoffs and raising the mininum wage back to pre-crisis levels.

Showing little intent to heed warnings from EU partners to stick to commitments in the 240-billion-euro ($272 billion) bailout, Tsipras said he intended to fully respect campaign pledges to heal the "wounds" of the austerity that was a condition of the money.

Greece would achieve balanced budgets but would no longer produce unrealistic primary budget surpluses, he said, a reference to requirements to be in the black excluding debt repayments.

In a symbolic move that appeared to take direct aim at Greece's biggest creditor, Tsipras finished off his speech with a pledge to seek World War Two reparations from Germany.

Tsipras ruled out an extending the bailout beyond Feb. 28 when it is due to end, but said he believed a deal with European partners could be struck on a "bridge" agreement within the next 15 days to keep Greece afloat.

Athens, which is shut out of bond markets and will struggle to finance itself without more aid quickly, plans to service its debt, Tsipras said.

"The Greek people gave a strong and clear mandate to immediately end austerity and change policies," he said. "Therefore the bailout was first cancelled by its very own failure and its destructive results."

Tsipras' stance is being closely watched by European Union leaders who to date have shown scant willingness to meet his demands, fearing a wholesale backtracking on the fiscal and economic reforms and a return to the free-spending days of the past that helped Greece rack up over 300 billion euros in debt.

Thomas Wieser, president of the Euro Working Group that prepares decisions at meetings of the euro zone's finance ministers, will be in Athens on Monday, a Greek government official said.

In a bid to show he was serious about avoiding a new upward spiral in public spending, Tsipras announced a series of cuts to make the government leaner by trimming ministerial benefits like cars and selling one of the prime minister's aircraft.

He also outlined plans to crackdown on tax evasion by targeting the rich and pledged public sector contracts would no longer favour oligarchs, a move that is likely to make him popular among the many Greeks fed up of a state they believe serves the wealthy.

Greeks have been severely hit by the austerity imposed on them by the "troika" of European Central Bank, International Monetary Fund and European Commission lenders. The country is only just coming out of years of economic depression, but roughly one in four Greeks are unemployed.

"The first priority of this government ... is tackling the big wounds of the bailout, tackling the humanitarian crisis just as we promised to do before the elections," Tsipras said.

Over the past week, Greek officials have laid out what they see as a transitional plan to keep finances flowing over the next few months while they renegotiate their debt agreement.

Instead of the next tranche of bailout funds - 7.2 billion euros due, pending a suspended review - Greece's new government wants the right to issue more short-term debt beyond a current 15 billion euro threshold. It also wants 1.9 billion euros in profits from Greek bonds held by the European Central Bank and other euro zone authorities.

With that as a bridge, Greek officials would then try to renegotiate payment of Greek sovereign bond debt, perhaps by extending payments, only paying interest and getting some respite on the budget surplus it is expected to run.

One government official suggested that not everything had to happen at once.

"The pace of the implementation of our promises is 'within four years'," the official said.

Tsipras gave no indication of that during his speech, but voiced optimism that a deal with Europe could happen quickly.

"Many ask: Is this possible to happen in the next days? The contacts I had with the institutional partners of the European Union convinced me that it is feasible," he said.

"Of course there may be many issues which are likely to require time to negotiate, such as the debt issue. But we are fully ready to agree now on most issues as part of a full programme."