Tsipras in Brussels for EU summit as euro talks stall. Next talks on Monday, less than two weeks before bailout expires 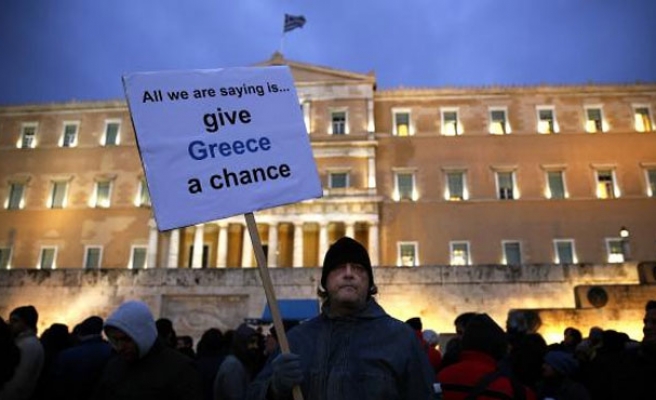 The summit chairman, conservative former Polish premier Donald Tusk, confessed to anxiety about Greece after the newly elected left-wing government, riding a wave of anti-austerity sentiment, refused to sign up to any extension of a deeply unpopular bailout package that expires in just two weeks.

"Oh yes," Tusk said with theatrical emphasis when asked by reporters if he was worried about what Germany and other euro zone states fear could be a rerun of financial chaos if Tsipras does not accept their conditions on cash to tide Athens over.

Tsipras himself told reporters there should be a deal that would restore Europe's dynamism and he renewed his promise to improve Greek state finances while relieving the burden on the poor.

"It's time to bring back the growth agenda to get back on a path of social solidarity needed for people and for our common European future," he said, pledging to raise revenue by fighting corruption and tax evasion. "We are now at a critical crossroads for Europe. We must show that Europe can bridge its differences and find solutions in line with its founding principles."

After Greek Finance Minister Yanis Varoufakis walked away from a tentative joint statement with the 18 other euro members in the early hours of Thursday in Brussels, finance ministers in the Eurogroup will meet again on Monday to seek a compromise.

While EU leaders have made clear they want to leave the Greek issue to their ministers, Tsipras seems likely to seek some kind of common political endorsement for the deal he wants.

He may get short shrift from the likes of German Chancellor Angela Merkel and French President Francois Hollande as they fly in late from overnight talks with Russian President Vladimir Putin on war and peace in Ukraine. That may dominate the summit.

Finnish Prime Minister Alexander Stubb, a hardliner on the need for Greece to stick with efforts to cut its massive debt and control state spending, echoed Tusk.

Stubb, who is fighting for re-election and needs time to put a new Greek deal to the Finnish parliament for ratification, described himself as definitely worried. "Time is running out," he said. "We need a deal on Monday."

A Greek official in Brussels reaffirmed on Thursday that Tsipras would not accept any extension of the current bailout, which he says has destroyed the Greek economy and needs to be replaced by policies that will pump cash into society to promote growth that can help Athens pays its debts.

Playing down the threat to Greece's banking system if creditors, including the European Central Bank, cut off funding after Feb. 28, the official said: "If we have a conclusion that says there is a programme in place, or if we are close to an agreement, no liquidity problems will exist."

Economist George Saravelos at Deutsche Bank noted that some of the argument was over "semantics", as for political reasons Tsipras wants to show his voters he has freed Greece from the old bailout run by the hated "troika" of the European Union, ECB and International Monetary Fund.

The euro zone, led by Germany, but also the ECB and IMF, are insisting on firm conditions to any "bridge" loan. Other governments, including Ireland, Portugal and Spain, which have had to seek help under tough conditions, are also keen their own voters do not see Tsipras winning a better deal than they did.

EU officials and analysts play down the risk of Greece being forced out of the euro zone, something Tsipras and most Greeks do not want and which could send destabilising ripples across the bloc as it faces a confrontation with Russia over Ukraine.

However, the politics of the Greek debate are difficult.

"The real risk in Athens seems to be that Tsipras has raised expectations to such an extent that he could find it extremely difficult to back down from his rhetoric and strike a deal which the rest of the Eurozone could accept," Berenberg Bank economists wrote in a note on Thursday.

Several officials said there was a gulf between the broad, imprecise demands of the Greek government and the Eurogroup's call for firm, technical proposals.

Eurogroup chairman Jeroen Dijsselbloem told a midnight news conference: "We didn't actually go into detailed proposals, we didn't enter into negotiations on content of the programme or a programme, we simply tried to work next steps over the next couple days. We were unable to do that."

Looking as casually confident as when he had arrived at his first such talks, Varoufakis said he hoped for a "healing deal" on Monday and stressed that, while much remained undone, "not finding a solution is not in our rationale".

Diplomats said efforts to clinch a joint statement were aborted after Varoufakis consulted government colleagues. A text seen by Reuters showed the Eurogroup had wanted to agree on "extending" the present loan programme - a phrase that is anathema to Athens.