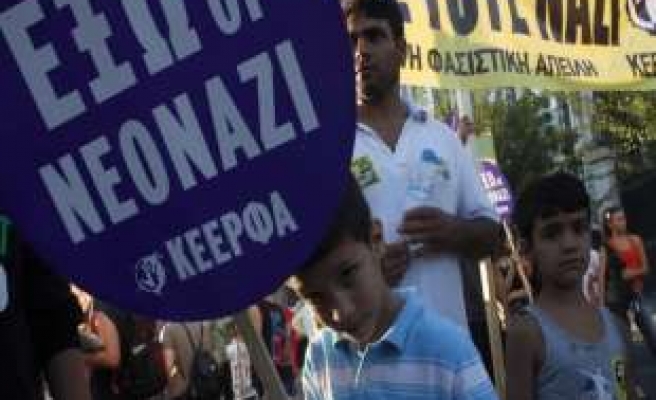 Greek police arrested the leader, two lawmakers and party members from the far-right Golden Dawn party on Saturday, and charged one member with being an accomplice to the killing of an anti-fascist rapper, a police official said.

Police said party leader Nikolaos Mihaloliakos, spokesman Ilias Kasidiaris, two other lawmakers and 10 members had been arrested on charges of founding a criminal organisation. They are due to appear in court this weekend to be formally charged.

Golden Dawn, ranked Greece's third most popular party in opinion polls, is under investigation for the murder of Pavlos Fissas which sparked violent protests and a crackdown on political extremism.

The party has denied any links to the killing and Mihaloliakos has warned the party could pull its 18 lawmakers from parliament if the crackdown does not stop.

If potential by-elections were won by the opposition, as some polls indicate, Greece's fragile two-party coalition would become politically untenable, Mihaloliakos has argued.

"Shame on them, the people will lift Golden Dawn higher,"  Ilias Panagiotaros, a Golden Dawn lawmakers told reporters before his arrest.

The party has 18 out of parliament's 300 lawmakers and scored 14 percent of voter support in opinion polls before the stabbing. A poll this week showed its backing had fallen to as low as 6.7 percent.

Greek lawmakers do not lose their political rights or seats  unless there is a final court ruling against them but the government has proposed a law that could block state funding for Golden Dawn if police find links to Fissas's murder.