Thousands rallied on Thursday in the working-class neighbourhood of Keratsini where Fyssas, who performed anti-racism raps under the stage name Killah P, was knifed. 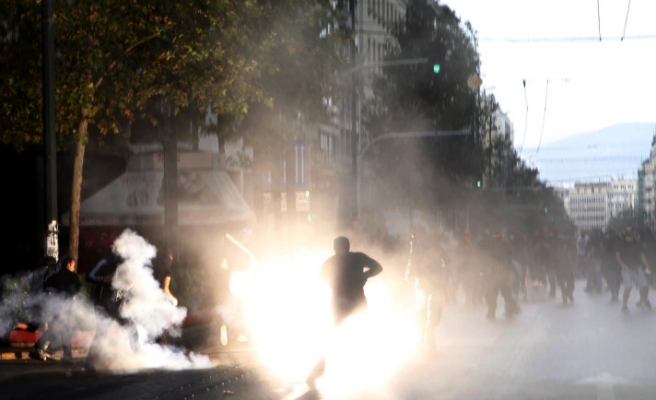 Greek police fired teargas at protesters who hurled petrol bombs and stones in Athens on Thursday during a rally marking one year since the killing of an anti-fascism rapper by a far-right Golden Dawn supporter.

The killing of 34-year-old Pavlos Fyssas -- who bled to death in the street after being stabbed -- sparked protests across Greece last year and prompted an investigation into Golden Dawn for evidence linking the party to violent attacks.

Thousands rallied on Thursday in the working-class neighbourhood of Keratsini where Fyssas, who performed anti-racism raps under the stage name Killah P, was knifed.

The short-lived violence began after dozens of hooded demonstrators broke off from the initially peaceful march and police in riot gear chased them through the streets.

At least four banks, two shops and one kiosk were attacked, a police official said.

Dressed in white T-shirts proclaiming "We won't forget", the demonstrators marched through the streets earlier on Thursday, holding banners that read: "Pavlos is alive -- crush the Fascists!"

Hundreds of mourners laid flowers and candles at the spot where he died and where a monument depicting Fyssas with microphone in hand was erected.

Fyssas's killing had fired outrage against a party that is widely regarded as neo-Nazi and the investigation into Golden Dawn landed its leader Nikos Mihaloliakos and other lawmakers in jail pending trial on charges of belonging to a criminal group, in the most significant mass round-up of lawmakers since a military coup in 1967.

Golden Dawn, with a swastika-like emblem, rejects the neo-Nazi label and any involvement in the attack, saying it is the target of a government-led witch-hunt on questionable evidence to rob the party of votes.

It remains the country's third-most popular political force in opinion polls, two years since it entered parliament for the first time on a wave of anger against the country's economic crisis, rising unemployment and political corruption.