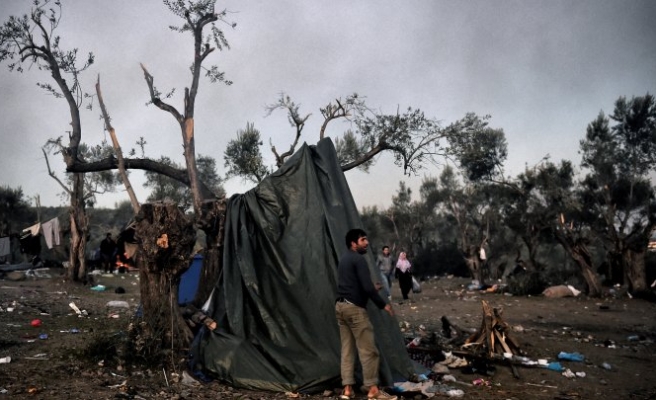 Hundreds of refugees near the Moria camp on the Greek island, Lesvos are facing "critical" conditions due to overpopulation.

Refugees tell tales of need, of the little they have to protect themselves from the rain, the cold, of safety issues and bad sanitation conditions.

Sherife al-Hassoun, 65, from Syria's Deir ez-Zor, is staying in an olive grove next to the overcrowded Moria Hotspot with her 11 grandchildren, of whom the youngest is three months old.

"My smallest grandchild cries all night. But there is no doctor we can find to examine her," says al-Hassoun, who lost the husband at a regime bombing.

The deteriorating weather conditions have been worsening the situation. Al-Hassoun says she and her grandchildren have to stay inside the summer camp tents despite the cold reaching lows of 6 degrees Celsius.

"All our things are getting soaked. It is so small and doesn't protect us from anything," she added.

There are a total of near 8,500 refugees in Lesvos, which has been taking the greater number of refugees among the Greek islands. More than 6,000 have to reside in Moria, which has a capacity for only a bit over than 2,000.

The refugees complain that there are no proper toilets or bathrooms.  They are filthy, says Syrian refugee Hassan Aloulou.

"We go to the sea to take shower sometimes. Otherwise, we go to the fields nearby. There is no hot water anywhere in this cold weather," he says.

Incessant fighting at night with little intervention from the police adds to the precariousness. Minaa Hasani from Iraq's Najaf says she is worried for her four children.

"I am alone here and afraid. My husband has been taken away. I am concerned about my daughters, especially since there is so much violence outside," she says.