Gunman kills six and himself in Slovak capital

A gunman killed six members of a single family and then shot himself when cornered by policemen in the Slovak capital Bratislava on Monday, the country's police chief said. 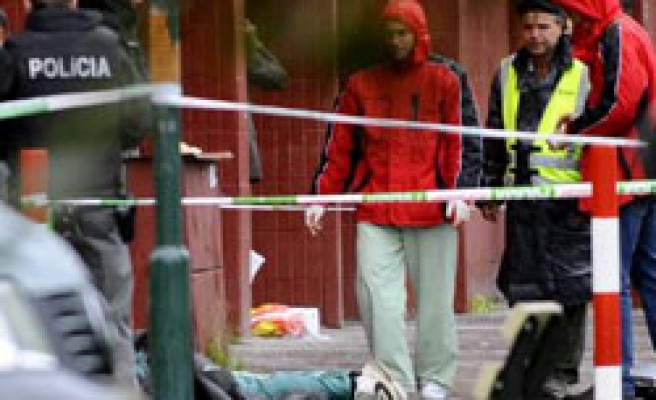 A gunman killed six members of a single family and then shot himself when cornered by policemen in the Slovak capital Bratislava on Monday, the country's police chief said.

The motive of the gunman, who was aged around 50, and his identity remained under investigation, police President Jaroslav Spisiak said.

A shootout with police following the murders wounded another 14 people, including a policeman shot in the head. Nine remained in hospital, the police chief said.

"He was alone. He fired at everything that moved during his escape bid, the policemen surrounded him...they made it impossible for him to escape," Spisiak told reporters near the apartment block where the shooting happened.

The Devinska Nova Ves district of Bratislava, where the shooting took place, was sealed off by police roadblocks for hours after the incident, a Reuters reporter on the scene said.

Spisiak said the man entered an apartment armed with a submachine gun with eight magazines, plus two handguns, and shot dead four women and one man inside.

He killed another relative of the family in the doorway before police cornered him, and then killed himself.

A spokeswoman for the Bratislava University Hospital said the hospital was treating nine of the wounded, none of whom were in critical condition.

"The most seriously injured patient has multiple shots in the stomach but I don't have the information that his life would be directly threatened," she said. "As far as I know, a three-year old girl is among the wounded."

Slovakia, a central European EU member, experienced some shooting incidents involving criminal gangs in the 1990s, but has had no large-scale shootings in recent years.

The shooting spree was the most lethal in Europe since a gunman opened fire on people in Britain's rural county of Cumbria in June, killing 12.