Ian Paisley's family said he died early on Friday and that a private funeral would be held in the coming days. 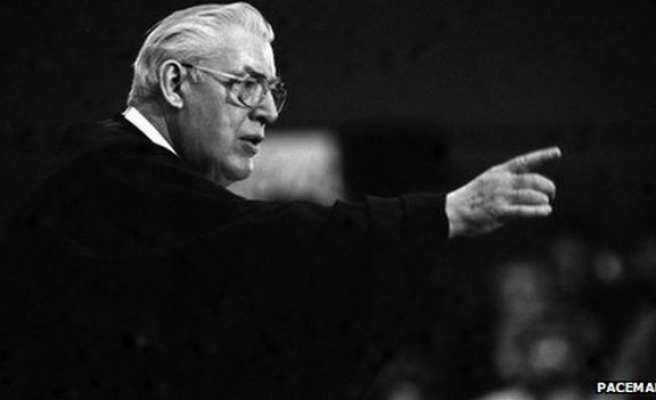 As the leading light of hardline Unionism, which wants to maintain links to the United Kingdom, Paisley stringently opposed any concession to the mainly Catholic nationalist community's desire for closer ties with the Irish Republic to the south.

But in a dramatic u-turn seven years ago, Paisley agreed to share power with former foes to become first minister in Northern Ireland's devolved government.

"I think we confounded the world by him, a pro-British, pro-Unionist politician, being able to work in a positive spirit with myself, an Irish Republican," said former Irish Republican Army commander Martin McGuinness, who became Paisley's deputy.

"A friendship grew out of that, and it's a friendship that lasted to this very day," McGuinness, the province's deputy first minister, told the Irish national broadcaster RTE.

Paisley's family said he died early on Friday and that a private funeral would be held in the coming days.

"My beloved husband, Ian, entered his eternal rest this morning," his wife Eileen said in a statement.

His family did not specify the cause of death. Paisley had a history of heart trouble and fell ill with heart problems in 2005, writing afterwards that he was "walking in death's shadow".

In 2011 he had a pacemaker fitted after being taken ill in the House of Lords and he spent 10 days in intensive care a year later with a heart condition.

For decades the face of unionist intransigence, Paisley refused to sit in talks involving Sinn Fein, the political ally of the Irish Republican Army (IRA), in the run up to the 1998 Good Friday agreement that provided for a power-sharing government between the province's main Protestant and Catholic communities.

He consistently opposed the agreement as a sell-out of Northern Irish Protestants' British heritage, and his mantra of "no surrender" to the IRA appeared to make him ill-suited to run the province when he became first minister in 2007.

But in office, he and McGuinness forged an unlikely friendship, earning the pair the nickname "the chuckle brothers".

"Many a man has gone to his grave sticking to his line and never changing. But Ian Paisley did, he held out the arm of friendship," former Irish prime minister Bertie Ahern, who helped negotiate the 1998 deal, told Irish broadcaster RTE.

"But he paid a huge price for it politically... he did not get the support of a huge amount of people that had been close to him for 40 or 50 years," Ahern added.

Some nationalists took the opportunity to repost to Twitter some of Paisley's most inflammatory statements, including his comparing the pope to the antichrist and saying the IRA was the military wing of the Catholic church.

Irish Prime Minister Enda Kenny and his British counterpart David Cameron remembered a man who was a "divisive" and a "controversial figure" in his early years, but who showed great courage to help cement peace after three decades of bloodshed that claimed the lives of more than 3,600 people.

"Even those who thought the least of his politics thought the most of him as a person," Robinson told the BBC.

Former British Prime Minister Tony Blair, who also presided over the Good Friday Agreement, said Paisley had been an "uncompromising, even intransigent" opponent, but ultimately knew when to compromise.

"Ian was a man of deep convictions. The convictions never changed. But his appreciation of the possibilities of peace, gradually and with much soul searching, did," said Tony Blair.

"He began as the militant. He ended as the peace-maker."