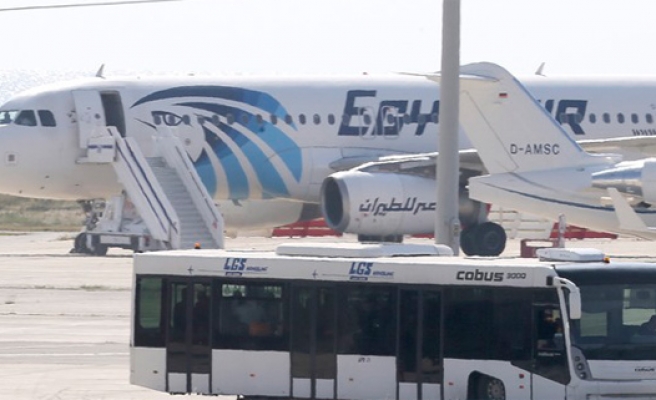 Authorities arrested the hijacker of an Egyptian airliner that was diverted to Cyprus on Tuesday, after the plane's passengers and crew were able to escape unharmed.

The hijacker, who officials said was motivated by personal reasons and who had reportedly claimed to be wearing an explosives belt, was detained after several tense hours at Larnaca airport where the plane had landed.

"The hijacker has just been arrested," Cypriot government spokesman Nicos Christodoulides said on Twitter. No further details were immediately available.

An AFP correspondent saw a man emerging from the aircraft, walking across the tarmac and then raising his hands to two awaiting counter-terrorism officers. They laid him on the ground and searched him for around two minutes before taking him away.

Passengers and crew had earlier been seen leaving the aircraft, including one who climbed out of the cockpit window.

"The passengers are safe and the crew is safe," Egypt's civil aviation minister Sherif Fathy said on state television minutes after Cyprus said the hijacker had been taken into custody.

Egypt's Prime Minister Sharif Ismail said in televised remarks that the alleged hijacker was an Egyptian and had demanded to speak to a European Union representative.

Officials earlier said there was no link to "terrorism" in the incident and that the hijacker had demanded to see a Cypriot woman who was his estranged lover, with whom he had children.