Testing of Russia's Iskander interceptor missiles has been delayed due to fire damage last week at a military base, Interfax reported 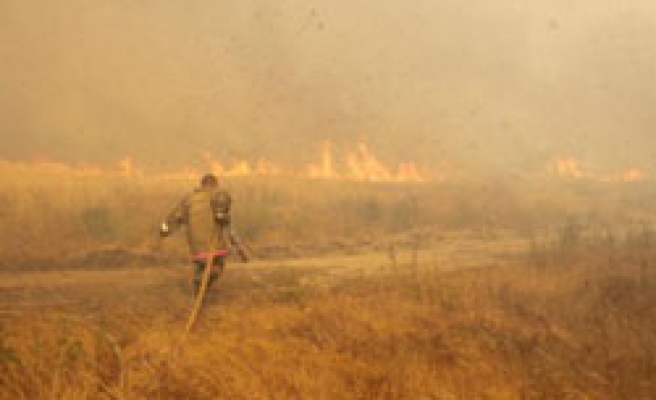 Russia's deadly summer heatwave could wipe up to $14 billion off economic growth, economists said on Tuesday, as wildfires raged on in several provinces and forecasters said sweltering weather won't abate this week.

The worst heatwave on record could knock 1 percentage point off gross domestic product, according to estimates, weakening a recovery from a 2009 slump due to the global financial crisis.

Before blistering temperatures parched crops and stoked wildfires that have shrouded Moscow in smoke, the economy had been expected to grow about 4 percent in 2010 after dropping by 7.9 percent last year -- the first contraction in a decade.

The drought also threw up a fresh barrier to the Kremlin's dream of cutting dependence on oil and commodities by developing and modernizing other sectors such as agriculture.

With elections in the next two years, Prime Minister Vladimir Putin and President Dmitry Medvedev are eager to avert a repeat of the fires that have killed at least 52 people and provided fuel for critics who accuse them of mismanagement.

The government backed a proposal by Emergencies Minister Sergei Shoigu late on Monday to pump 54 billion roubles ($1.81 billion) over the next three years into the firefighting force, whose weaknesses have been exposed by the wildfires.

Critics called the investment too little, too late, warning it would not fix a fire-protection system they say has been gutted by shortsighted legislation and sorely lacks equipment.

The cash injection will go towards top quality aircraft and trucks, Shoigu said.

Stanislav Belkovsky, a political analyst and Kremlin critic, said the spending "will not solve the problem at all".

Russia needs tens of thousands of firetrucks and dozens of planes that are no longer made domestically, he said.

Shoigu pledged to have all fires in the region ringing Moscow extinguished by the end of the week. His ministry said the area covered by wildfires across Russia was unchanged on Tuesday, with firefighters battling 557 fires covering 1,740 square km (672 miles).

The Emergencies Ministry spokeswoman said 42 aircraft and almost 166,000 people were fighting the blazes.

Acrid smoke has hung over the swelering Russian capital for weeks, and the city's top health official said on Monday that twice as many people were dying every day as in normal weather, with the increase largely due to the heat.

In the province that surrounds Moscow, the mortality rate was up by one-quarter over the last three weeks, Interfax quoted the provincial health minister as saying on Tuesday.

The heatwave -- probably the worst in Russian history, according to the state weather forecaster -- has aggravated a drought that has driven world wheat prices up at the fastest rate in over 30 years and raised the spectre of a food crisis.

Alexander Morozov, chief economist for Russia and CIS at HSBC, expects the heatwave and its aftermath to shave 1 percentage point off GDP growth.

"The losses in agriculture now look more serious, and I expect that will contribute 0.5 percentage points. The remaining half a percent will come from other sectors -- lower industrial output, lower demand and lower productivity," he said.

The toxic smog over Moscow has cast a pall over Russia's commercial center and is expected to eat into profits for restaurants and shops. Some economists, however, believe the total loss to GDP growth will be about 0.5 percent.

Kremlin critics blame Putin and other authorities for the extent and persistence of the wildfires and smog.

Analysts say the centralization of power during Putin's 2000-2008 presidency and forest management legislation he backed had hurt Russia's ability to react to wildfires in time.

Average highs of at least 35 Celsius (95 F) are expected to persist through the week in central Russian regions and the south, the deputy head of Russia's state-run forecasting service, Dmitry Kiktyov, told Reuters.

Testing of Russia's Iskander interceptor missiles, which the Kremlin has used as a card in efforts to avert a buildup of U.S. and NATO military force near its borders, has been delayed due to fire damage last week at a military base, Interfax reported.

Officials initially denied fire had reached the base near Kolomna, 100 km (60 miles) southeast of Moscow, but prosecutors said it had destroyed hangars full of costly aviation equipment.