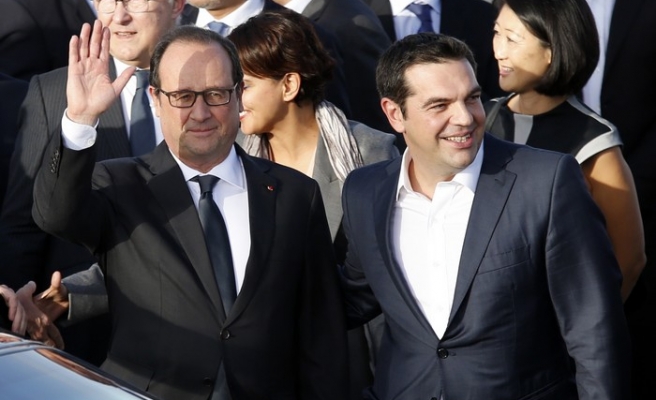 French President Francois Hollande on Friday called for the restructuring of Greece's debt.

Speaking at a press conference after meeting his Greek counterpart Prokopis Pavlopoulos in Athens, Hollande said: "The EU showed solidarity by signing a €86 billion ($95.5 billion) bailout program with the Greek government, but more effort is needed."

Hollande has repeatedly called for the deferral of interest rate payments on Greece's debt, which now amounts to 200 percent of GDP.

In his remarks in the Greek capital, where he paid a two-day visit, the French president touched upon the Syrian refugee issue, and the need to find a political solution for the crisis.

"More than 4 million fled Syria and many are arriving in Europe, so there must be a political solution; in addition, we must fight ISIL terrorism," Hollande said.

Greek president Pavlopoulos, for his part, said the austerity measures to fight the financial crisis in the country proved unsuccessful, and led to a humanitarian crisis in Greece.

Pavlopoulos also called for debt restructuring. "We will fulfill our responsibilities, but our partners should do what is necessary, so that public debt can become sustainable," he said.

"The debt is not sustainable today. This debt should be made sustainable with a restructuring worked out with the EU and the Financial Stability Mechanism," Pavlopoulos added.