France's Hollande says if there is peace agreement, the only other resolution will be war while Merkel says that sending weapons won't resolve crisis. 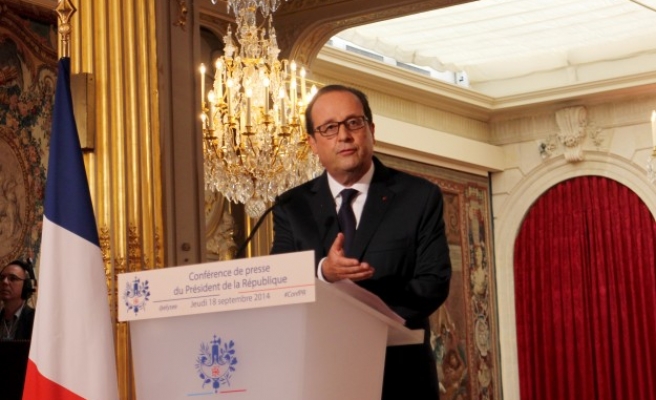 German Chancellor Angela Merkel said on Saturday that sending weapons to help the Ukrainian government fight pro-Russian fighters would not help bring about a solution to the crisis.

"I understand the debate but I believe that more weapons will not lead to the progress Ukraine needs. I really doubt that," she told the Munich Security Conference after presenting a Franco-German peace initiative toMoscow on Friday.

"If it is true that it cannot be solved militarily, then I think we should focus our efforts on the other things. There is already a large number of weapons in the region and I don't see that this has made a military solution more likely."

The comments by U.S. Air Force General Philip Breedlove were his strongest public intervention yet in the debate going on in Washington over whether the United States should send defensive weapons to help theUkrainian government forces.

"I don't think we should preclude out of hand the possibility of the military option," Breedlove, NATO's Supreme Allied Commander, Europe, told a group of reporters at the annual Munich Security Conference.

He said he was referring to providing weapons or capabilities, not sending soldiers. "There is no conversation about boots on the ground," he said.

"The Ukrainians have been straightforward in their request to all the nations of NATO and other nations as well about the capabilities they need to address artillery problems, to address communications problems and jamming problems," he said.

"The Ukrainians have asked for help in all of those areas and those are the areas that nations are discussing."

"The Russian forces and the Russian-backed forces are changing the landscape in order to better position themselves in whatever solution that comes out of this and we need to keep the diplomatic pressure on," he said, adding that the ultimate goal was a diplomatic and political solution to the conflict.

Breedlove said the Russians had supplied more than 1,000 combat vehicles to separatists in eastern Ukraine.Moscow denies such involvement in the conflict.

"We do see hundreds of Russian regulars in eastern Ukraine providing capabilities like air defence, electronic warfare support to artillery, command and control etc ... We have not seen large regular formations of fighting troops," he said.

Many people from other countries had also been brought into the area to fight alongside the fighters in the east, he said.