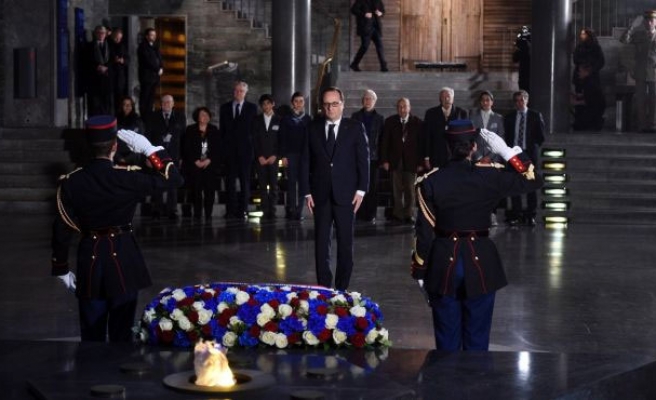 President Francois Hollande appeared to rebuff Israeli Prime Minister Benjamin Netanyahu's invitation for French Jews to emigrate, by promising on Tuesday to protect them from anti-Semitism and telling them: "Your place is here".

"You, French people of the Jewish faith, your place is here, in your home. France is your country," Hollande said in a speech to mark 70 years of the liberation of the Auschwitz death camp.

After a gunman killed four people in a Jewish supermarket in Paris this month, Netanyahu said he wanted to increase Jewish immigration from France and other European countries where he said there was "terrible anti-Semitism".

Speaking at the Paris Shoah memorial to French Jews who died at Auschwitz and elsewhere during World War Two, Hollande said France would remain a welcoming home for its Jewish population.

"I want to say that France will protect all its children and will tolerate no insult, no outrage, no desecration," he said.

France has the biggest Jewish community in Europe -- around 550,000 -- a population that has grown by about half since World War Two.

But figures published by the Representative Council of French Jewish Institutions (CRIF) on Tuesday showed the number of anti-Semitic acts in France had doubled last year to 851, 241 of which were violent.

When Netanyahu flew to France earlier this month to join a march against the attacks on satirical newspaper Chalie Hebdo and the Jewish supermarket, he said: "Any Jew who wants to immigrate to Israel will be received here with open arms".

According to CFCM, the council of Muslim organisations, anti-Islam acts and threats in France, home to Europe's biggest Muslim population of some 5 million, fell in 2014 to 133 from 226, but a total of 128 acts and threats were made in the 12 days after the Charlie Hebdo attack of Jan. 7, 2015.

Later on Tuesday. Hollande was due to attend a ceremony at Auschwitz, where the Nazis killed about 1.5 million people, mainly European Jews, between 1940 and its liberation by soldiers of the Soviet Union in 1945.