The far-right National Front has signalled it plans to make the Roma issue a central campaign theme for next March's municipal elections. 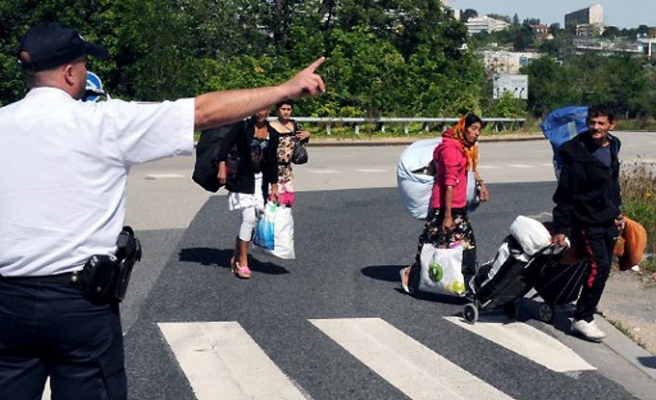 President Francois Hollande told two of his top ministers on Wednesday they should end a public row over France's policy towards its Roma population if they wanted to stay in his government.

Interior Minister Manuel Valls last week said most of some 20,000 Roma housed in makeshift camps around French cities could never be integrated into French society and so should be "taken back to the border" for transfer back to Romania and Bulgaria.

Housing Minister Cecile Duflot, a leader of the ecologist Greens coalition partners to the ruling Socialists, denounced Valls for betraying the core human rights values that France prided itself on, and demanded that Hollande reprimand him.

Seeking to heal a widening rift between centrists and left-wingers in his coalition over the issue, Hollande took both Duflot and Valls to task at his weekly cabinet meeting.

"I insist that all ministers pay full mind to their mission, their behaviour, how they express themselves and of course, how they act," Hollande told the meeting, according to presidential aides.

"Being a member of a government does not mean you cannot have your point of view but it does mean you have to strictly apply the rules I have just set out," he said, adding: "the debate should be inside the government not in public".

The dispute not only exposed tensions within Hollande's 17-month-old coalition but raised new questions over the authority of the president, whose poll ratings have fallen to 23 percent amid dissatisfaction over his record on the economy and jobs.

Hollande said he was also asking Prime Minister Jean-Marc Ayrault, who is suffering from low popularity ratings too, to ensure better coordination in the government.

The far-right National Front has signalled it plans to make the Roma issue a central campaign theme for next March's municipal elections. It is hopeful it can tap a protest vote against Hollande to score gains in town halls across France.

Valls' tough talk on law and order has made him Hollande's most popular government minister. A poll released at the weekend showed three-quarters of French agreed with his comments on the Roma.

Hollande's government has sought to distance itself from a hard-line policy under conservative former President Nicolas Sarkozy, who explicitly accused Roma of links to crime and launched a programme of deportations.

Yet since the beginning of the year some 13,000 Roma have been evicted from illegal camps and welfare groups say the failure of schemes to re-house their inhabitants means they find themselves on the streets or simply set up new camps elsewhere.

Moreover France this week said it was currently opposed to Romania and Bulgaria joining theEuropean Union's passport-free Schengen zone when current restrictions on the movement of Romanian and Bulgarian citizens end in January 2014.

French Foreign Minister Laurent Fabius said France was concerned about the ability of Romanian and Bulgarian authorities to ensure border security, airing concerns that are also shared by Germany.

However Hollande said all efforts would be made to integrate Roma into society where possible, calling government policy "firm but human".