'Turning the country (Greece) into a warehouse is no solution to Europe's refugee crisis,' HRW Greece specialist says 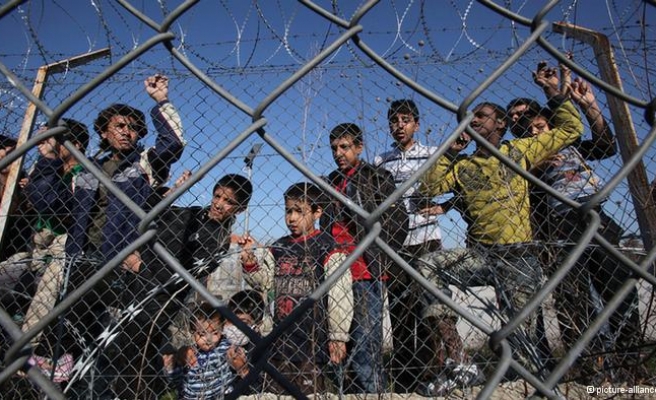 Forcing Greece to become a "warehouse" for migrants is no solution to Europe's crisis, Human Rights Watch said Friday, adding that it would be wrong to send asylum seekers back to Turkey.

"Greece has its fair share of responsibility for the situation on the ground, but turning the country into a warehouse is no solution to Europe's refugee crisis," HRW Greece specialist Eva Cosse said in a statement.

The European Union this week said Greece could face border controls with the rest of the passport-free Schengen zone if it fails to protect the bloc's frontier.

And a Belgian official has suggested that Greece should create camps for hundreds of thousands of migrants.

An EU report compiled in November said Greece was failing to properly register and fingerprint migrants, with security concerns high after revelations that jihadists behind the Paris attacks that month had slipped into Europe by posing as refugees.

Athens counters that the procedure has drastically improved in the last two months with the arrival of promised EU staff and registering equipment.

However, the basic needs and rights of thousands of asylum seekers and migrants were still being ignored, New York-based HRW said.

Cosse said the Greek government was failing to identify and support vulnerable individuals such as pregnant women, unaccompanied children and disabled persons.

And there were still "serious difficulties" for those seeking asylum, she said.

"The Greek asylum service has set up a system for appointments almost exclusively through Skype, but it's very difficult to get through and people can wait for weeks to book an appointment," Cosse said.

Cosse also criticised a Dutch proposal for the EU to accept up to 250,000 refugees a year from Turkey if Ankara takes back irregular migrants.

"Turkey cannot be considered a safe country for automatic returns," she said.

More than one million people reached Europe's shores last year -- the majority of them refugees fleeing conflict in Syria, Iraq and Afghanistan -- in the continent's worst migration crisis since World War II.

Most cross by boat from Turkey to Greece and the United Nations said Thursday more than 50,000 people have turned up on the EU member's beaches so far this year, while 200 people died making the dangerous journey.

A two-day strike by sailors this week -- renewed for another two days on Friday -- is keeping new arrivals from sailing to the Greek mainland.

But London-based Amnesty International on Friday accused Greek police of causing hardship to thousands of migrants on the border with Macedonia by not allowing them access to a camp operated by aid groups.

"The camp can accommodate 1,200 people but currently is only a third full," the organisation said.

"Thousands of refugees, asylum seekers and migrants... are forced to spend the night outside, exposed to difficult weather conditions," Amnesty said, warning that below-zero temperatures threatened the health of infants and children present.

A Greek government source explained that police are allowing access to the border camp only to Syrians, Iraqis and Afghans, the only nationalities allowed by Macedonia to continue their journey to northern Europe.

Other nationalities who have no hope of continuing their journey are encouraged to turn back.