With placards exclaiming “Stop bombing Iraq,” demonstrators marched to Downing Street to criticize the UK for joining in air strikes against ISIL in Iraq. 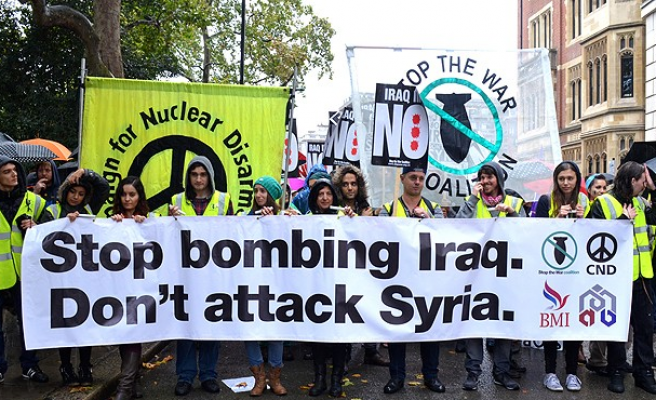 Hundreds of protestors marched in London on Saturday, voicing their opposition to the UK's joining in air strikes against ISIL in Iraq.

Protestors marched on Downing Street and gathered outside the Temple tube station in the British capital.

Despite the heavy rain, many people took part in the nearly 5-hour-long rally organized by the "Stop the War" Coalition.

When a group of protestors arrived at Number 10 Downing Street, a minute of silence was taken for British aid worker Alan Henning, killed by ISIL militants and for those killed in the region by coalition bombing.

British Labour Party politician and MP for Islington North Jeremy Corbyn told Anadolu Agency (AA) that he voted against the bombing of Iraq when Westminister was voting for military strikes and said, "I voted against not because I support in anyway ISIL. I do believe that Western interventions make the situation worse. The bombing will create more support for ISIL, not less. What I want to see is a peace in the region. I think ISIL is not a great threat to UK. I think the bigger threat to the UK is our continuing involvement in wars all around the world."

Parliament voted the Iraq air strikes on September 26, with a large majority of 524 MPs voting for the military action, and only 43 voting against them.

The UK has launched various strikes against ISIL in Iraq since the measure was voted.