Rallies draw tens of thousands of teachers and sympathizers, in the biggest demos in Hungary since 2014 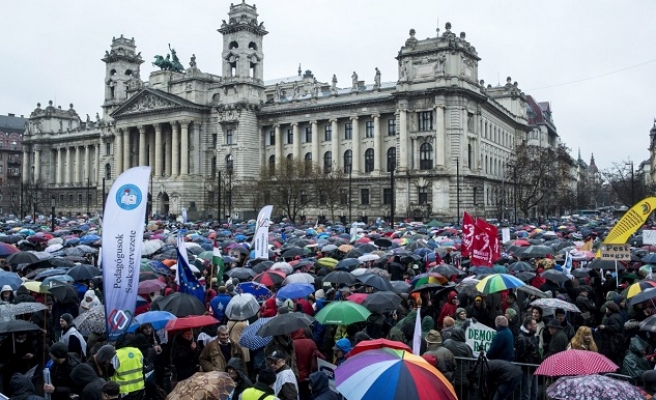 Hundreds of Hungarian teachers held a nationwide walkout and formed human chains around schools on Wednesday, in a fresh escalation of a growing revolt against the government's tight grip on education.

Protests against Prime Minister Viktor Orban's sweeping centralisation of schools since 2012 began in November. Rallies this month and last drew tens of thousands of teachers and sympathisers, in the biggest demos in Hungary since 2014.

Organisers said teachers at over 200 schools officially took part in Wednesday's protest between 8:00 am and 9:00 am (0600-0700 GMT), and that individual teachers at many others had also participated.

Social media showed pictures from around the country of teachers forming rings around school buildings, joined by many students expressing solidarity.

"This is the start," Katalin Torley, a French teacher, said outside the Ferenc Kolcsey high school in Budapest where around 100 teachers joined a human chain.

"If there is no meaningful response by the government, we will gradually increase the pressure," she said.

A list of 12 demands by organisers, the "I want to teach!" civil group, include reinstating schools' independence, cutting workloads for teachers and students and increasing state spending on education.

The controversial Orban, whose shake-up of Hungary's state institutions has seen him labelled an autocrat by some, has pledged to make changes but insists that teachers should join a government-led roundtable forum to discuss their concerns.

But a protest organiser, Istvan Pukli, said Wednesday more acts of civil disobedience will follow if the government does not sit down face-to-face with the teachers within two weeks.

Many of the demonstrators in the recent protests have worn checked shirts, which became a symbol of the protests after a former government official insulted "dishevelled checked-shirt wearing" teachers last month.

Teachers called the Wednesday "civil disobedience" rather than a strike as they say Hungary's current labour laws prevent any meaningful strike action.

"This is a different form of protest, it has never happened here before that an entire profession has stepped up in such a way," Torley said.