Hungary in state of emergency, refugees walk to Croatia

Hungary has declared a state of emergency, shutting it borders, with refugees now re-directing their route to Croatia 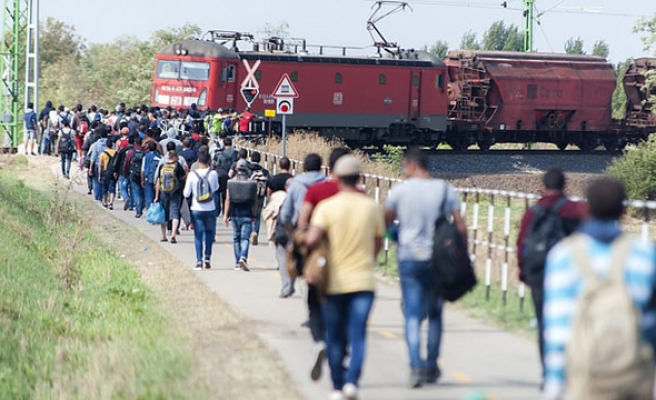 Hungary declared a state of emergency and shut its border to refugees Tuesday as the infighting among European nations over the crisis intensified.

Heavily armed soldiers with dogs walked the demarcation between Hungary and Serbia and watched as it was sealed off with massive coils of barbed wire.

The military move sparked chaos among the thousands of desperate asylum seekers hoping to pass through to Germany.

The seal will also be extended to Hungary’s border with Romania, officials said.

Austria also imposed new controls on its border. As of midnight, travelers coming from Hungary would have to carry a passport or an identity card recognized by the European Union to gain entry, Austrian officials said.

The requirement may be extended to Austria’s borders with Slovenia, Italy and Slovakia, officials said.

Croatia found itself dragged into Europe's refugee crisis on Wednesday as dozens walked through fields across Serbia's border with its western neighbour, rerouted by bus after Hungary locked down its own frontier with Serbia.

A Reuters cameraman saw at least 100 refugees walk through cornfields into European Union member Croatia, most having arrived by bus from Serbia's southern border with Macedonia to the western town of Sid on the Croatian border. Others pulled up in taxis. Some identified themselves as Iraqis.

Serbian media reported that at least 10 refugee buses had left for Sid from the southern Serbian town of Presevo, where several thousand enter every day from Macedonia, streaming north across the Balkan peninsula.

A journalist on the Croatian side of the border said a first group of refugees had been rounded up by Croatian police and taken away to be registered.

The buses would normally run to Serbia's border with EU member Hungary, but Hungary's right-wing government on Tuesday launched a crackdown that effectively sealed the frontier to refugees with a metal fence and strict new rules that saw asylum seekers rejected within a matter of hours.

Many may now hope to enter EU member Croatia and then Slovenia, which is part of Europe's Schengen zone of border-free travel, and beyond to Austria and Germany.

Alert to the possibility, Croatian Interior Minister Ranko Ostojic said on Tuesday that Zagreb had prepared an "emergency plan in the case of an influx of thousands of refugees", but did not give details.

"The government will quickly activate that emergency plan if need be," Ostojic said. (Writing by Matt Robinson; editing by Ralph Boulton)