Hungarian PM's visit to Brussels is opportunity to explore in depth what further assistance can be provided to Hungary, says European Commission President 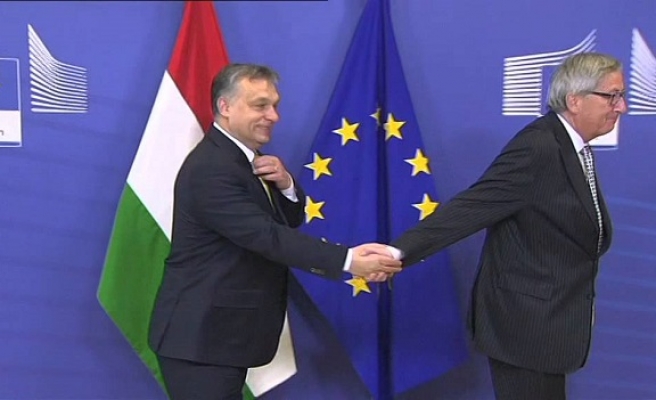 The European Union has already offered to send Budapest nearly eight million euros ($9 million) to help it cope with the 50,000 refugees, most thought to be fleeing war in Syria, who last month entered the EU state.

"The visit of Prime Minister Orban on Thursday will be a further opportunity to explore in depth what further assistance we can provide to Hungary," Natasha Bertaud, a spokeswoman for Juncker, told a news briefing in Brussels on Tuesday.

In the last two years, Hungary, also a member of Europe's passport-free Schengen zone, has become a major transit country for refugees and refugees attempting to reach countries like Austria and Germany by land rather than sea.

Hungarian police on Tuesday cleared Budapest's main train station of hundreds of refugees trying to get to western Europe, prompting a demonstration by around 200 young men outside.

"With regard to Hungary's actions to control its border and to maintain order within its country, this is obviously very much Hungary's prerogative and we welcome efforts to apply EU rules and protect our common external border," Bertaud said.

Migration and border control are the preserve of the 28 member states.

But Bertaud repeated the opposition of the EU Commission to the razor wire that Hungary has rolled out along its border with Serbia.

"We do not feel that fences send the right message nor that walls are going to be a solution to the problem, but Hungary has the right to protect its border as it sees fit," Bertaud said.