Icelandic Metrological Office said a no-fly zone in a radius of 3 nautical miles just above the Bardarbunga volcano in central Iceland would remain in effect. 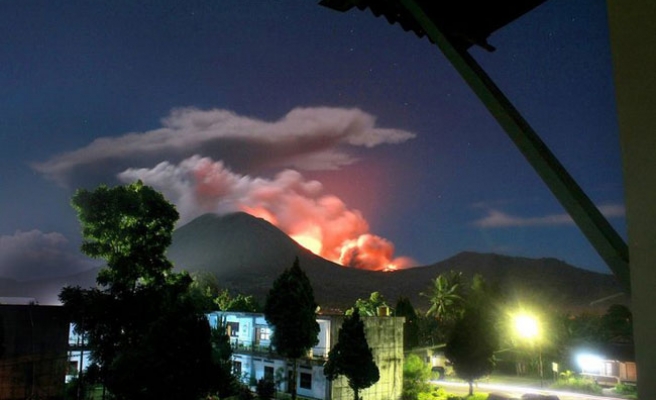 Iceland said a small volcanic eruption in the Bardarbunga volcano system that started in the early hours of Friday had stopped and it had lifted all airspace restrictions.

Earlier in the day the Icelandic Meteorological Office reduced its ash warning level for aviation to orange after concluding the eruption posed no threat to aircraft.

"A fissure eruption which started at midnight at Holuhraun lava north of Vatnajokull glacier, ended at around 0400 UTC (GMT)," the National Crisis Coordination Centre said in a statement. "The fissure has been estimated to be 600 metres long and is situated 5 km north of Dyngjujokull glacier in north-Vatnajokull glacier."

It said there continued to be seismic activity in the area.

Iceland's largest volcanic system, which cuts a 190-km (120-mile)-long and up to 25-km-(15-mile)-wide swathe across the North Atlantic island, has been hit by thousands of earthquakes over the last two weeks and scientists have been on high alert in case of an eruption.

Reykjavik's Met Office said that in the early hours of Friday, a fissure eruption began in a lava field north of the Vatnajokull glacier, which covers part of the Bardarbunga system. There have been no signs of ash like that from the Eyjafjallajokull eruption that shut much of Europe's air space in 2010.

While the risk of an ash cloud is highest in case of a sub-glacial eruption, Icelandic authorities for a few hours on Friday raised the aviation warning level to red, the highest on a five-colour scale and indicating that an eruption is imminent or under way, with a risk of spewing ash.

The eruption was at the tip of a magma dyke 40 km from the main Bardarbunga crater, Met Office seismologist Martin Hensch said earlier.

Nick Petford, a vulcanology expert at the University of Northampton in Britain, said fissure eruptions were often spectacular, but relatively low key and often die out in a couple of days. But there could be a sting in the tail, he said.

"Exactly the same thing happened in 2010 with the Eyjafjallajokull volcano," Petford said. "The main eruption was in April, but in March there was a fissure eruption which was a precursor to the much larger eruption."

The Eyjafjallajokull event was particularly disruptive because it pushed ash up to precisely the elevation used by transatlantic aircraft, while prevailing winds propelled the cloud into European air space. The ash was also particularly sticky due to its chemical composition.

Petford said that when the current eruption subsided, scientists would be looking for signs of more quakes deeper under the volcano, which would suggest more magma was welling up, and for any swelling of the volcano that could be measured using GPS.

"Those are pretty clear evidence that large amounts of magma are being stored within the volcano and that's a good indication it will explode."