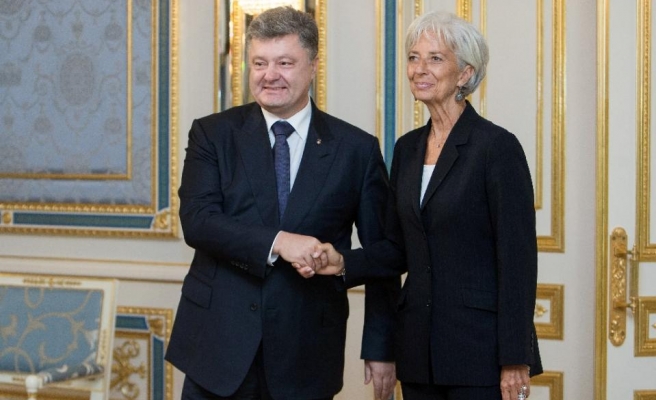 "I'm extremely encouraged by the progress that you have been achieving (over) the past few months," Lagarde said at a press conference alongside Ukrainian President Petro Poroshenko.

"As I told you in a previous discussion, Ukraine has surprised the world."

Lagarde added a few words of caution, though, saying, "This is not the end of the road. You started the journey... reform is a process."

On August 27, four commercial lenders agreed to a 20 percent write-down on their portion of Ukraine's sovereign and sovereign guaranteed debt.

The accord provided "immediate debt relief" of around $3.6 billion (3.23 billion euros), according to Ukrainian finance ministry figures.

The deal also extended repayment of $11.5 billion by four years, and allowed Kyiv to avoid what otherwise would have been inevitable default.

The IMF and United States put bondholders under intense pressure during the five-month negotiations to accept short-term losses in return for preventing Ukraine's pro-Western leaders from being forced into resuming their reliance on Russia.

The IMF said the deal will help the government reduce costs as required under a $40 billion rescue programme it designed earlier this year.

The agency will send an assessment mission to Ukraine later this month to monitor compliance with the programme, Poroshenko said.