In eastern Ukraine, the mob rules

The deaths of more than 40 pro-Russian activists in a burning building during clashes in the Black Sea port have injected new venom into the fight for Ukraine. 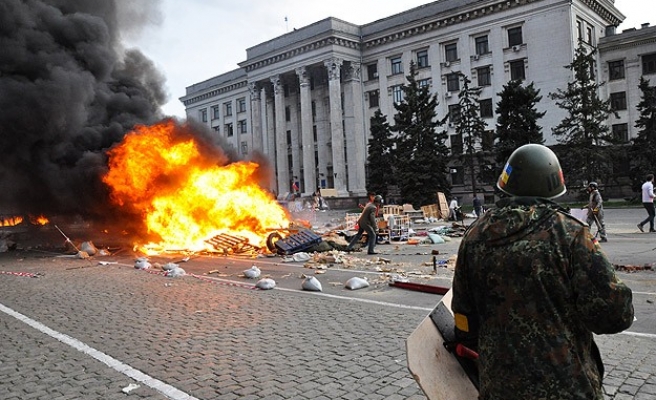 His mistake was to run from the advancing mob, and that was enough for the men and women carrying clubs, knives and swords through Donetsk's Lenin district.

They set upon him. Beaten and bloodied, the unidentified man was saved, in a manner, by militiamen who dragged him through the crowd under metal shields, bundled him into the back of a car and drove him off at speed to an unknown fate.

No one could say what he'd done; he was a "provocateur", a term used by both sides of Ukraine's increasingly bitter divide to describe the other, but in the rebel-held east it means only one thing - a supporter of the "Fascist" government in Kiev.

It was a brutal picture of the mob-rule that has descended upon this city in eastern Ukraine, the biggest to fall to an armed uprising against a government in Kiev that wants to take the country west. Kiev blames Russia for fomenting the violence, a charged denied by Moscow.

Pro-Russian separatist leaders want a referendum on May 11 to declare Donetsk and the surrounding region an independent republic.

Whatever the outcome, it won't be recognised by Kiev. The anger unleashed in the process will prove hard to rebottle, and points to a state descending into dangerous disorder, potentially civil war.

"We will not forgive Odessa!" the crowd chanted, a phrase that has quickly become the new rallying cry in towns across Ukraine's industrial east.

The deaths of more than 40 pro-Russian activists in a burning building during clashes in the Black Sea port on Friday have injected new venom into the fight for Ukraine.

Sixty-seven pro-Russian activists, detained by police during the unrest, were busted from prison on Sunday by a crowd that broke down the main gate.

The cry was first heard in Donetsk on Saturday, when a couple of hundred people smashed up the city's state security building as evening fell, then walked down the street and ransacked the business headquarters of the region's Kiev-backed governor, steel baron Serhiy Taruta.

They carried out chairs, crates of vodka and icons. Middle-aged women cheered young men in balaclavas, the new power in this city of one million people built on steel and coal.

"This was for yesterday! They're monsters, worse than monsters," said Tatiana Kamniva, who had joined the protest with her daughter. "This is just the beginning," she said.

On Sunday, the target was the military prosecutor's office, then the Lenin district council building, both of which were flying the Ukrainian flag.

Masked men in military fatigues and armed with automatic rifles made some attempt to marshal the crowd, which was blocked at the doors to the council building by other militiamen holding shields and clubs.

The building belonged to the people and shouldn't be burned, a man said through a loud hailer. "Don't worry, we'll go west, and take Kiev," he said, trying to placate them.

A handful of policemen looked on, a helpless force in several eastern towns where armed gunmen walk the streets.

The head of the council turned up and opened the doors so the flag could be lowered and set alight. It burned weakly on the ground.

One woman, wielding a metal bar, lamented that she had wanted to smash something up, and yelled at the militiamen for taking away the man who had run from them.

There were similar scenes at the weekend in coastal Mariupol, south of Donetsk, where protesters torched a downtown branch of Privatbank, owned by an oligarch who backs the pro-European political forces in Kiev.

"In our town, the people are in power," said a 55-year-old former sailor who gave his name as Mikhail, surveying the damage.

His wife, Irina, said the arson was probably the work of more provocateurs trying to discredit the uprising. Nevertheless, Mikhail said, "They did right to burn it."