Anti-bailout party on course to form government which could end up with absolute majority. The leftwing Syriza aims to write off debt, boost wages, pension and their victory would mean a turning point in the euro zone crisis. 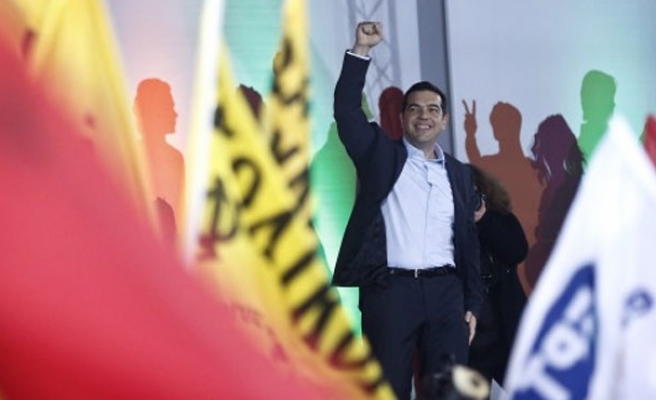 Greece's leftwing Syriza looked set for a comfortable victory over the ruling conservatives, an exit poll showed, with a chance of winning a full majority to face down international creditors and roll back years of painful austerity measures.

Syriza could gain 35.5-39.5 percent of the vote, well ahead of the conservative New Democracy party of outgoing Prime Minister Antonis Samaras on 23-27 percent, according a joint exit poll for Greek television stations issued immediately after voting ended.

If confirmed, the result would be enough to install 40-year-old Syriza leader Alexis Tsipras as prime minister at the head of the first euro zone government openly opposed to bailout conditions imposed by European Union and International Monetary Fund during the economic crisis.

The poll showed Syriza could have between 146-158 seats in the 300-seat parliament, with the final result heavily dependent on whether former Prime Minister George Papandreou's centre-left Movement of Democratic Socialists enters parliament.

A clearer indication will come after 9.30 p.m. local time (1930 GMT) when the interior ministry is due to issue first official projections, with a breakdown of seats based on a partial count of the vote.

"It is a historic victory, we still have to see if it will be a big historic victory," Syriza spokesman Panos Skourletistold Greece's Mega TV. "It sends a message against austerity and in favour of dignity and democracy," he said.

Financial markets have been worried a Syriza victory will trigger a new financial crisis in Greece, but the repercussions for the euro zone are expected to be far smaller than feared the last time Greeks went to the polls in 2012.

A final result could come in the early hours of Monday but after one of the shortest campaigns in recent Greek history, voters appear to have rejected the austerity medicine prescribed during a crisis which has threatened almost 4 million Greeks or a quarter of the population with poverty.

As the biggest party in the 300-seat parliament, Syriza would gain an automatic premium of 50 seats but underGreece's complicated election rules, the number of votes it needs for an absolute majority depends on how the overall vote is split up.

The exit poll showed the centrist To Potami (The River) and the far-right Golden Dawn party tied in third place with seven or eight parties, set to enter parliament.

If it ends up short of an absolute majority, Tsipras will have to try to form a coalition with smaller parties or reach an agreement that would allow Syriza to form a minority government with ad-hoc support from others in parliament.

Tsipras has promised to keep Greece in the euro and has toned down some of the fiery rhetoric for which he was known but his arrival in power would herald the biggest challenge to the approach so far adopted to the crisis by euro zone governments.

Coming after the European Central Bank's move to pump billions into the bloc's flagging economy, Greece's rejection of austerity has set up an immediate standoff with Berlin, which insists the bailout deal must be respected.

Tsipras has promised to renegotiate a deal with the European Commission, European Central Bank and International Monetary Fund "troika" and write off much of Greece's 320 billion-euro debt, which at more than 175 percent of gross domestic product, is the world's second highest after Japan.

At the same time, he wants to roll back many of the harsh austerity measures demanded by the "troika", raising the minimum wage, lowering power prices for poor families, cutting property taxes and reverse pension and public sector pay cuts.

Financial markets have been on edge ahead of the elections, although the ECB's massive bond-buying programme and growing confidence that a Syriza-led government could compromise with its creditors boosted confidence last week.

Syriza officials have said they would seek a six-month "truce" putting the bailout programme due to end on Feb. 28 on hold while talks with creditors begin.

Greece, unable to tap the markets because of sky-high borrowing costs, has enough cash to meet its immediate funding needs for the next couple of months but it faces around 10 billion euros of debt repayments over the summer.

Without fresh cash, it will be unable to meet the payments, raising the spectre of an exit from the euro.