British soldiers beat to death an Iraqi civilian in an act of "unjustified and brutal violence" that left a very great stain on Britain's armed forces, an inquiry concluded on Thursday. 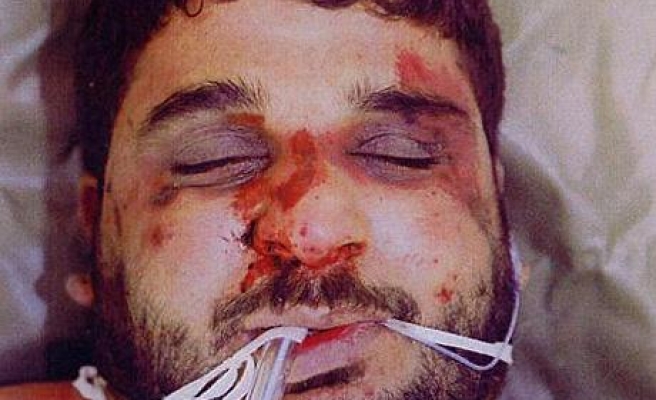 British soldiers beat to death an Iraqi civilian in an act of "unjustified and brutal violence" that left a very great stain on Britain's armed forces, an inquiry concluded on Thursday.

Former judge William Gage, who led the three-year investigation, said senior officers should have done more to prevent the 2003 death of hotel worker Baha Mousa and sustained attacks by British troops on nine other detainees in Iraq.

Mousa, 26, was repeatedly kicked and punched over a 36-hour period while being held in a squalid detention block on a British military base in the southern city of Basra.

Hooded and handcuffed in the fierce heat, the father-of-two suffered 93 visible injuries, including a broken nose, broken ribs and bruising all over his body, the inquiry found.

One British soldier, Corporal Donald Payne, boasted to colleagues of conducting a "choir" by beating Mousa and other prisoners so that they cried out in sequence, the inquiry heard.

"The events...were indeed a very great stain on the reputation of the army," Gage said in a statement.

"They constituted an appalling episode of serious, gratuitous violence on civilians which resulted in the death of one man and injuries to others."

Britain was the main ally of the United States in Iraq invasion. Abuse of Iraqi prisoners by U.S. soldiers, particularly at Baghdad's Abu Ghraib jail, drew protests from around the world.

The inquiry criticised the then head of the First Battalion of the Queen's Lancashire Regiment, Lieutenant Colonel Jorge Mendonca.

"As commanding officer, he ought to have known what was going on in that building long before Baha Mousa died," Gage said, adding that Mendonca bore a heavy responsibility for the events.

Mousa was arrested at a hotel in Basra by British soldiers searching for weapons and insurgents on Sunday, Sept. 14, 2003.

He and nine others were taken to a British army base where their hands were tied with plastic cuffs and sandbags placed over their heads. They were forced to hold awkward "stress positions" for hours at a time and were kept awake to prepare them for interrogation.

One prisoner described how a liquid was poured over his head, petrol rubbed under his nose and a lighter held near his face, apparently to make him think he was about to be set alight.

The inquiry found that the attacks on the men started soon after they arrived at the base and intensified in the evening of their arrest, in what Gage described as a "free for all".

Mousa died late on Monday night after a final violent struggle with his guards in a small, disused toilet.

Gage rejected the soldiers' defence that Mousa had been trying to escape and said Corporal Payne beat him after losing his temper. Payne is the only soldier to have been convicted over Mousa's death, receiving only a one-year sentence for inhumane treatment.

The inquiry concluded it was highly unlikely that Mousa or any of the others were involved in the insurgency against the U.S.-led occupation.

Mousa died from the effects of a violent assault and an unsafe method of restraint, exacerbated by heat, fear, exhaustion and lack of food and water, the inquiry found.