Iran's Rouhani heads to Europe to drum up business

The three-day trip comes a week after Tehran's deal with world powers came into force, allowing the US and the EU to lift economic sanctions in exchange for Iran curbing its nuclear activities 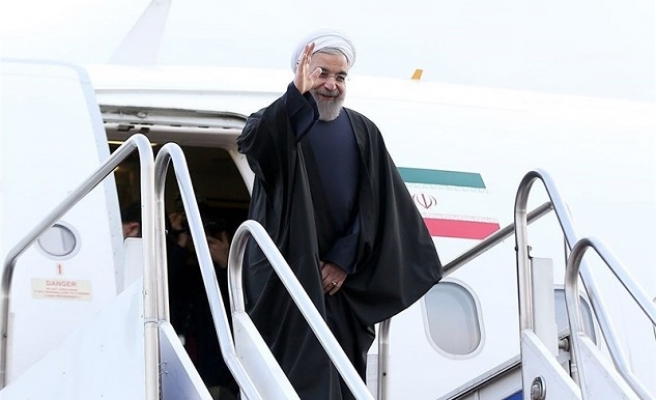 The visit, whose chief aim is to boost economic ties and which will see Rouhani visit France later this week, had been planned for last November but was cancelled after the deadly jihadist attacks in Paris.

The three-day trip comes a week after Tehran's deal with world powers came into force, allowing the United States and the European Union to lift economic sanctions in exchange for Tehran curbing its nuclear activities.

Tehran said Sunday it will buy 114 Airbus planes to revitalise flag carrier Iran Air's ageing fleet -- the first major commercial deal since sanctions were lifted -- and the deal is expected to be signed during the Paris leg of the visit.

The Iranian leader has hailed the agreement as a "new chapter" for Iran as its economy returns to global markets.

He is also to meet Pope Francis at the Vatican, in the first official visit by an Iranian president there since Mohammad Khatami in 1999.

Francis is due to urge Rouhani to put pressure on his Syrian ally President Bashar al-Assad and to seek improved relations with Saudi Arabia.

Heading a high-powered business delegation, Rouhani is also to speak at an economic forum.

But now sanctions have been lifted, Italian businessmen are eager to renew ties.

"Italy was Iran's leading economic and trade partner before the sanctions," Italian economic development minister Federica Guidi said a few months ago, seeking to ensure her country regains that position.

Fifty-eight percent of Italy's exports to Iran are in the mechanics sector, followed by chemical products at eight percent.

In welcoming the Iranian leader, Europe is seeking to regain some of the business terrain it has lost in recent years to Russia and China and emerging economies such as Turkey.

A new delegation of Italian entrepreneurs is set to return to Iran in February, with a focus on the energy and infrastructure sectors, a ministry official said.

But the road to Iran's re-integration into the global economy will not be easy.

For major companies a priority is for Iran to be reconnected to the global network of SWIFT banking transactions to enable companies present in Iran to transfer funds directly, analysts say.

One area in need of urgent investment is the creaking oil sector.

Iran, which has the world's fourth-biggest oil reserves, has seen its production fall to less than three million barrels per day (bpd) since 2012.

Iran also has the world's largest reserves of gas and was the number four producer last year.a