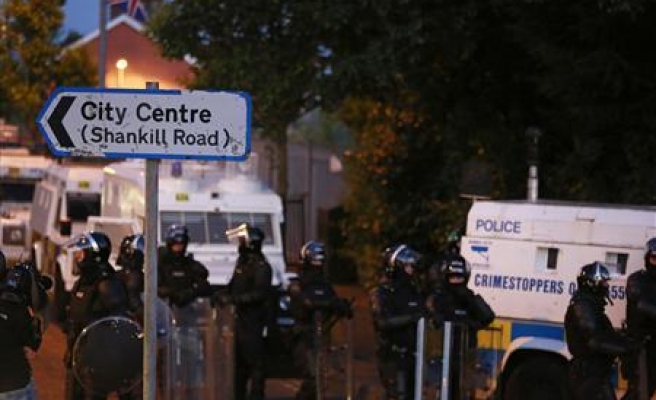 The arrest of Irish politician Gerry Adams may have its roots in a closed archive of taped interviews with former paramilitaries in Northern Ireland that researchers now fear could be used to charge others over sectarian violence from decades ago.

U.S. and British authorities last year won a court battle against Boston College in Massachusetts to obtain interviews from the oral history archive. They said the records were needed to investigate the 1972 killing of a widowed mother by the IRA, a notorious incident from the period known as "The Troubles."

The legal victory created a diplomatic time bomb. Material previously made public from the archive has linked Adams to the death of the woman, Jean McConville. Adams has always denied membership of the IRA and involvement in the murder.

The success of police from Northern Ireland in gaining access to the material now means that other interviews could in theory also be obtained from the archive and form the basis of new prosecutions, said Ed Moloney, an Irish journalist now living in New York who helped oversee the oral history project that ran from 2001 to 2006.

The interview subjects included 26 IRA members and 20 members of the opposing Ulster Volunteer Force. All were promised confidentiality until their deaths.

"The American government has to make it clear this is not a repository of evidence the PSNI can come raid at will," Moloney said, referring to Northern Ireland's police force.

Moloney and another researcher, former-IRA-member-turned-historian Anthony McIntyre, say the U.S. government offered too much help to Northern Ireland's authorities without regard to the impact that it could have on peace agreements that were negotiated to end the decades long sectarian violence.

Adams' arrest has led to threats against McIntyre, his wife, said. He had been labeled an informer on Twitter, Carrie Twomey said in a telephone interview. McIntyre lives in the Republic of Ireland, in the district that Adams represents as a member of Ireland's parliament.

Boston College declined on Thursday to discuss the archive, a collection of digital and analog recordings and printed transcripts still kept by the institution, whose leafy campus sits just outside the city.

Moloney said some interviewees have sought to have their material from the archive returned. A college representative said he could not immediately comment on that point. Government officials had not sought more archive material, he added.

The archive was begun just after the 1998 Good Friday peace agreement ended fighting in Northern Ireland. Its academic sponsors envisioned it being opened to the public decades later as an academic resource on the conflict that killed thousands.

Two events thrust the material onto the public stage sooner. First was a 2010 book by Moloney, "Voices from the Grave," that drew on interviews given for the archive by IRA commander Brendan Hughes and David Ervine, a UVF militant and later a political figure. Both had died, allowing their stories to be told under the terms of their agreements with the project.

In the book Moloney quotes Hughes connecting Adams to McConville's death and ordering her burial as an informer. Adams has always vigorously denied being involved in her death.

Separately, Irish newspapers in 2010 published reports about Dolours Price, an IRA member imprisoned for a 1973 London bombing, that tied Adams to McConville's death and other incidents.

The publications drew new police attention and led to the subpoenas, which Boston College sought to limit in what became a test of academic freedom.

Whatever confidentiality the interviewees expected, the researchers "made promises they could not keep: that they would conceal evidence of murder and other crimes until the perpetrators were in their graves," U.S. prosecutors said in a 2011 court filing.

They called the Belfast project "laudable" but added that "the promise of absolute confidentiality was flawed."

In 2012 a federal appeals court in Boston upheld the subpoenas, citing a 1972 U.S. Supreme Court ruling that journalists have no privilege against being forced to testify in a criminal proceeding.

The court later cut from 85 to 11 the number of interviews the college had to turn over. The interviews were given by seven individuals whose identities were kept secret and were referred to by a single letter.

The legal battle by the researchers and Boston College drew support from some academics who worried the process could have a chilling effect on how historians study conflicts.

Without more protection, researchers face "potentially crippling uncertainty for those who gather information from confidential sources, including academic researchers," stated one amicus brief filed by a group of social scientists.

Others, however, felt the Boston College project fell outside the bounds of the usual academic practices.

Mary Marshall Clark, director of Columbia University's Center for Oral History Research, said professional oral historians should have strict guidelines to follow and aim to make their interviews public rather than keeping them secret for decades, as the Belfast Project planned.

"We cannot protect people," she said. If controversial subjects come up, she said, "we would tell them in the interview, when they talk about that, they better think about that and call their lawyers."