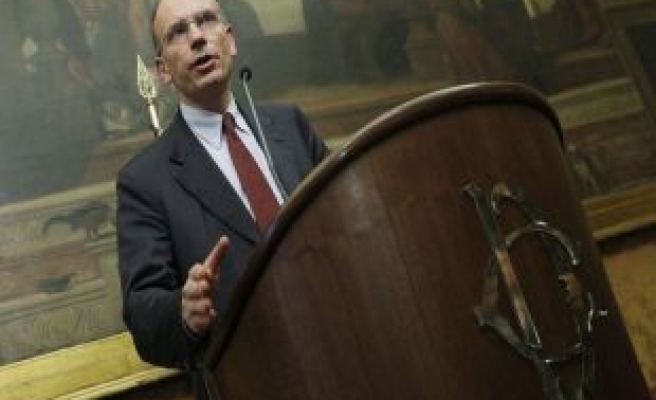 Italian Prime Minister Enrico Letta will call a confidence vote in parliament after a showdown with centre-right partners in his fragile coalition scuppered a vital package of budget measures on Friday and took his government to the brink of collapse.

Letta flew back from a visit to New York with coalition unity already in tatters after a threat by centre-right lawmakers to walk out over former premier Silvio Berlusconi's battle against a conviction for tax fraud.

"Efficient government action is obviously incompatible with the mass resignation of a parliamentary group which should support the government," Letta said in a statement after a cabinet meeting on Friday.

"Either there is a new start and the interests of the country and its citizens are put first or this experience is at an end," he said.

Regional Affairs Minister Graziano Delrio said Letta, who met President Giorgio Napolitano on Friday, would go before parliament in the next few days to seek backing to continue.

After two days of mounting tension and with financial markets on edge, Letta met ministers in a last-ditch bid to secure approval for additional budget measures needed to bring Italy's deficit within European Union limits.

The meeting was also intended to satisfy a key demand of the centre-right and avert the sales tax from rising to 22 percent, from 21 percent. The tax increase was passed by the previous government of Mario Monti and rates are due to rise on Tuesday.

However with the meeting still in progress, officials made clear that no deal could be reached.

Failure to agree on some 3 billion euros ($4.06 billion) of budget measures, demanded by both Letta's centre-left Democratic Party (PD) and Berlusconi's People of Freedom (PDL), underlined the breakdown between the two traditional rivals that were forced together by last February's deadlocked election.

Economy Minister Fabrizio Saccomanni, who has staked his credibility on meeting the EU budget limits and faced constant sniping from the PDL over recent months, was furious at the breakdown, officials said.

PDL lawmakers said proposals to avert the rise in sales tax would have been funded by an increase in fuel duties that would have punished consumers and simply replaced one tax by another.

"We can't accept the blame for this," PDL secretary Angelino Alfano, who is also deputy prime minister, told the cabinet, according to one official. "We can't stay in the government if taxes are going up and there are no cuts to spending," he said.

Letta's left-right coalition has flirted with collapse ever since Italy's top court convicted former premier Berlusconi of tax fraud last month and sentenced him to four years in prison, commuted to a year of house arrest or community service.

On Wednesday, PDL lawmakers said they would resign en masse if a Senate committee meeting on Oct. 4 votes to begin proceedings to expel their leader from parliament, under legislation that bars convicted criminals.

On returning to Italy on Friday after courting foreign investors in New York, Letta met President Napolitano who, if the government fell, would have to either call new elections or try to oversee the creation of a new coalition.

A spokesman for the president's office said the head of state, who has repeatedly said he does not want a return to the polls, had given Letta his full support to seek the backing of cabinet and parliament.

Opinion polls suggest the two main blocs in parliament have roughly equal support among voters and under Italy's widely criticised electoral system, any new election would probably produce another stalemate.

If Letta, who has a commanding majority in the lower house, can secure the backing of a few dozen Senators among PDL rebels or opposition parties including the anti-establishment 5-Star Movement, he could form a new coalition.

With Italy, the euro zone's third-largest economy, struggling with a two-year long recession, a 2 trillion euro public debt and youth unemployment of around 40 percent, the wrangling has prevented meaningful reforms.

The political convulsions have increasingly worried investors, although with the European Central Bank guaranteeing stability in the markets, there has been none of the panic seen during previous crises.

At an auction of 10-year bonds on Friday, Italy's borrowing costs rose to their highest level in three months, while the premium investors demand to hold Italian debt rather than AAA-rated German paper widened to 267 basis points from under 250 at the start of the week.