Italian left-wing slammed League Party for not postponing Rome demonstration as the country was mourning. 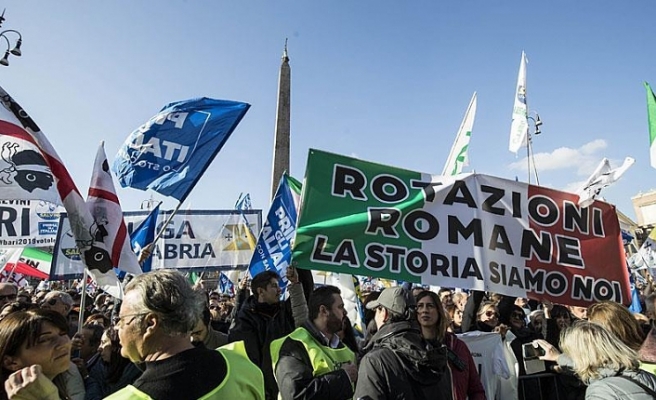 Italian Deputy Prime Minister and Interior Minister Matteo Salvini, also the leader of far-right League Party, Saturday said that Europe had to "revive its soul lost for the sake of globalization.”

League Party has been in the coalition government alongside with anti-system Five Starts Movement since July, and the far-right Italian party reiterated anti-refugee, Islam and European views during the demonstration.

Speaking during the organization, League Party head Salvini said that Europe was moving towards sinking. "There is a need of a Europe that would re-emerge its identity and soul lost by some people in the name of globalization," he said.

Salvini stressed that they wanted to build a Europe based on employment, respect and progressiveness. "How can one guarantee employment and economic growth written in the agreements after seeing what's going on in Europe? Have a look at the emerging financial crisis in very strong Germany, think about the yellow vest demonstrations. Violence is never right, but those who planted the seeds of poverty and fraud now bear the brunt," he said.

Salvini went onto note that there wouldn't be any additional taxes in 2019 state-budget, which had triggered tension between Italy and the EU Commission after the latter rejected it.

"The real racists are those who think of emptying the African Continent," he said, adding that Africans didn’t expect charity but instead looked forward to developing in their own country.