Italy in talks with EU to share responsibility for migrants

Italy's navy has been patrolling the waters between Africa and Sicily since October, when 366 people drowned after their boat capsized just a mile from the Italian island of Lampedusa 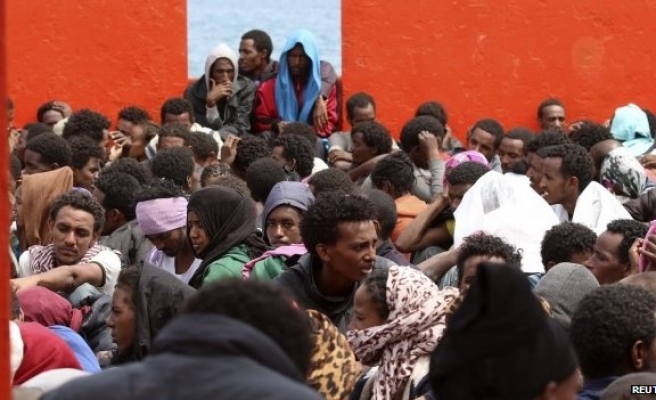 Italy is in talks with other European Union states about sharing the burden of rescuing migrants crossing the Mediterranean in crowded boats from North Africa, senior officials meeting in Milan said on Tuesday.

So far this year, more than 63,000 migrants have arrived in Italy by sea, according to the UN refugee agency (UNHCR), surpassing the previous record of around 62,000 set in the whole of 2011, the year of the "Arab Spring" uprisings.

But more than 500 have died trying to make the perilous sea crossing, including 12 on Sunday when their boat capsized off the coast of the Libyan Tripoli, the UNHCR said on Tuesday.

After meeting with EU interior ministers in Milan, EU Home Affairs Commissioner Cecilia Malmstrom said that she was discussing with Alfano what was needed for a "scaled-down" version of Mare Nostrum.

But she warned that Frontex alone would not be enough and that member states would have to contribute directly, and there was as yet no time frame for a possible EU substitution of Italy.

"Frontex is a small agency and cannot take over Mare Nostrum tomorrow. We will need more assets from the member states and that's why we are asking Italy to sit together with us to try to identify exactly what would be needed," she said.

"Frontex can do a lot, but we do not have the means to totally substitute (Mare Nostrum) unless all other member countries also contribute with vessels or helicopters or staff or money."

Italy's navy has been patrolling the waters between Africa and Sicily since October, when 366 people drowned after their boat capsized just a mile from the Italian island of Lampedusa.

That tragedy focused international attention on the desperate risks taken by many migrants, whose plight has been highlighted by human rights groups and Pope Francis.

Though about two-thirds of those who are rescued move on quickly to other EU countries, member states have so far offered Italy little help with Mare Nostrum, and Frontex has provided only limited air surveillance.

Italy - along with Spain, Greece and Malta - have been left mostly on their own to manage the growing number of migrants who seek to enter the EU in boats departing from North Africa, partly because increasing anti-immigrant sentiment in countries like Britain and France makes it unpopular to help out.

Most of the migrants who reached Italy by sea last year were refugees fleeing Syria's civil war and Eritrea's harsh military service, and the trend has continued this year, according to the UNHCR. Of the 12 confirmed dead on Tuesday, three were Syrian and three Eritrean.