Napolitano, 89, could announce his decision in his traditional year-end address on Dec. 31 and leave office several weeks later, commentators in major newspapers said 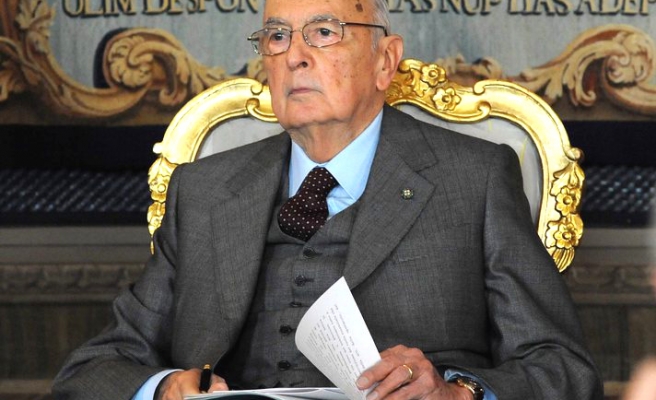 Italy's President Giorgio Napolitano, who reluctantly agreed to a second term in 2013 at a time of political crisis, may step down in January, five years before the end of his term, political commentators said on Sunday.

Napolitano, 89, could announce his decision in his traditional year-end address on Dec. 31 and leave office several weeks later, commentators in major newspapers said.

The presidential palace said in a statement it would "neither confirm nor deny" the reports, adding that Naptolitano would explain his decision when he makes it.

Napolitano, who said from the outset he would not stay for the entire seven-year mandate, has confided to friends that he suffers from a series of age-related ailments that were making it difficult for him to carry on in the job, according to a report in Corriere della Sera newspaper.

La Repubblica quoted Emanuele Macaluso, a retired politician and close friend of Napolitano's, as saying the decision to step down was "a closed question," and that the country could not ask Napolitano "to make any more sacrifices".

In April 2013, Napolitano yielded to pleas from squabbling politicians and agreed to an unprecedented second term to try to end a chaotic stalemate left by deadlocked elections in February of that year.

After his election, he brought some relative political stability to Italy by appointing Enrico Letta of the centre-left Democratic Party to form a government with a broad coalition. Letta resigned in February after losing a leadership battle within the Democratic Party to current Prime Minister Matteo Renzi.

Napolitano said at the time he would step down once he felt that the euro zone's third-largest economy was on the road to institutional reforms, such as a new electoral law currently in parliament that would guarantee more political stability.

The palace statement said the president always considered his term "an extraordinary extension".

The Italian head of state, who is elected by parliament, has broad political powers. He can appoint prime ministers, dissolve parliament and call early elections.

Potential candidates to succeed Napolitano include Romano Prodi, the former prime minister and European Commission president, and former Prime Minister Giuliano Amato. Both have been candidates for the presidency in the past.

A former communist, Napolitano was first elected to parliament in 1953 and has been a politician most of his life. He was speaker of the lower house of parliament and also served as interior minister.