Italy's Renzi says Britain leaving EU would be a 'disaster' 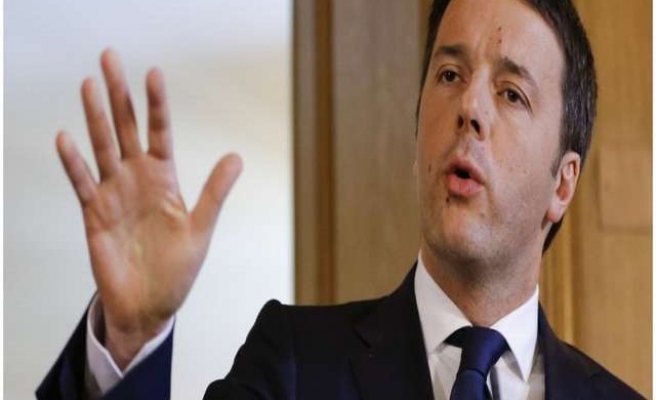 Britain leaving the European Union would be a "disaster" for both it and the 28-nation bloc, Italian Prime Minister Matteo Renzi said on Sunday.

British Prime Minister David Cameron has promised to renegotiate Britain's ties with the EU before offering a membership referendum in 2017 if his Conservatives are re-elected next year.

Cameron favours staying in a reformed EU but has warned recent battles, including over a 1.7 billion euro ($2.1 billion) EU budget surcharge, have made it harder to make the case to keep Britain in.

"This could be a disaster, a disaster for Europe obviously, I believe also for the UK," Renzi told Sky News, adding that he believed both Britain and the EU benefited from Britain's membership.

"We need a UK able to invest in a different idea of Europe."

Cameron, under pressure from Eurosceptic lawmakers in his own party and the rise in popularity of the anti-EU UK Independence Party, has provoked warnings from some EU leaders with talk of trying to limit immigration from within the EU.

Former Conservative Prime Minister John Major said on Sunday there had been "a lot of misunderstanding" over the British position on limiting freedom of movement.

"The European Union has a very pragmatic record of finding a way around difficult corners like this ... we shall need to do so again," he told the BBC. "We are not going to close our doors and nor should we either economically or politically, but there is in the midst of that a particular problem of numbers."

Major said the flow of migrants to Britain was being accelerated by the worsening economic situation in southern Europe and it was possible that only short-term measures were needed.

"Once they are back in growth the demand to come here will almost certainly fall. So I see it as a shortish-term problem, maybe another year, maybe longer, and we need a little help over that period," he said.