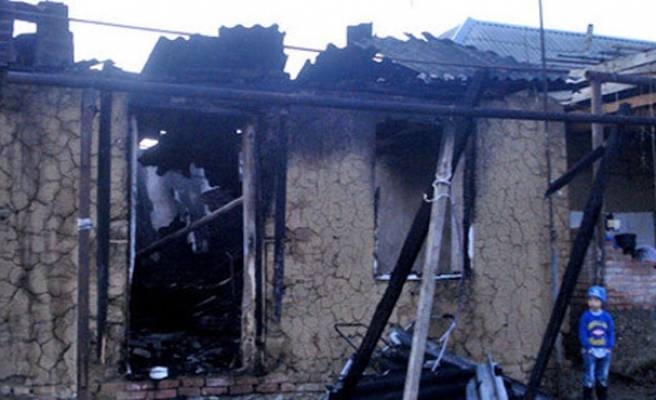 Rights campaigners accused authorities in Russia's Chechnya region of meting out "collective punishment" by burning down the homes of suspects in retribution for a gun attack last week.

Protesters homes in the capital city of Chechyna have been burnt down on the order of Chechyn leader Ramzan Kadyrov, emulating the Israeli's method of burning down homes of Palestinian protesters.

Kadyrov, the Kremlin-installed leader of the predominantly Muslim region, said after the attack that families would be expelled from Chechnya and their houses demolished.

"He announces collective responsibility and collective punishment, which runs against the Russian constitution, Russian law, against Russia's international obligations," Tatiana Lokshina, a director at Human Rights Watch in Russia, told a news conference on Thursday.

The conference was interrupted twice by men throwing eggs at the speakers or accusing them of bias against Kadyrov.

Moscow based organisation “Memorial” had organised demonstrations in Grozny and showed documents that proved that the homes were in their names. Held on the  December 4, the homes of protesters that were killed were burnt down two days later.

Using Israel as a role model

It appears that the Kadyrov is turning the punishment of the demonstrators into a political tool.

In a Dec. 5 Instagram posting, Kadyrov said: "If a rebel in Chechnya kills a police worker or another person, the family of the rebel will be swiftly expelled from Chechnya with no right to return, and (their) home will be destroyed."

The rights activists said six homes of suspected militants had been razed since Kadyrov's statement, four of which did not belong to gunmen whose bodies were among those identified after last week's battle.

"The law and the Russian constitution do not exist in Chechnya. Chechnya's only law is formulated by Ramzan's (Kadyrov's) orders," said rights campaigner Svetlana Gannushkina.

Russian President Vladimir Putin praised Kadyrov for his response to the attack in Chechnya, where the volatile security situation is a sensitive issue for the Kremlin.

Israel also destroys the homes of the relatives of Palestinians for punishment. In recent days, an Israeli had set alight the home of a Palestinian who had who had rammed their car into a tramway station. As such, this gave rise to Kadyrov using the same method for protesters in Chechyna.