Kerry to meet Lavrov on Sept. 12

US Secretary of State Kerry will meet with Russian FM Lavrov on Thursday in Geneva to discuss the Syrian deal, as Syria has welcomed Russia’s suggestion that it should place its chemical weapons under international control 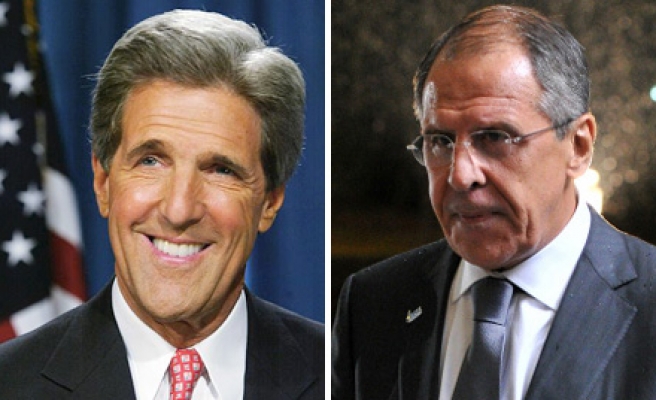 As US President Barack Obama said he wants to pursue diplomatic efforts to remove the Syrian regime's chemical stockpile, Secretary of State John Kerry will meet with Russian Foreign Minister Sergey Lavrov on Thursday in Geneva to discuss a possible deal.

During the meeting, Kerry and Lavrov will try to reach a deal on a UN Security Council resolution that would require Syria to place its chemical weapons under international control, according to a State Department official.

A disagreement between the Western permanent members of the UN Security Council and Russia has been ongoing. The US, UK and France want a binding UN resolution to back them up with the threat of force. The Russian side, which first proposed that the Syrian chemical stockpile be placed under international control, disagrees and does not want to include a timetable and threat of force in a resolution.

Kerry said on Tuesday during the House Armed Services Committee meeting that this process must not be a "delaying tactic," adding, "I have in several conversations with Foreign Minister Lavrov, that this cannot be a process of delay, this cannot be a process of avoidance, that it has to be real, it has to be measurable, tangible. And it is exceedingly difficult -- I want everybody hear to know -- to fulfill those conditions."

US President Obama also emphasized that an agreement on chemical stockpiles must verify that the Assad regime keeps its commitments.

Meanwhile, Russian President Vladimir Putin explained that the Syrian regime cannot hand over its chemical stockpile as long as the threat of force continues. He urged the US to remove such a threat.

Although the Obama administration did not take a step in that direction, Obama asked the US Congress to delay voting on a motion which will authorize the US to take military action against the Syrian regime in response to the August 21 chemical gas attack which killed over 1,400 civilians. Obama, who is unwillingly to take military action under his administration, believes such a step could give a chance to the solution of the crisis through diplomacy rather than the use of force.

Syrian Foreign Minister Walid Al Muallim also said on Tuesday that the Assad regime was prepared to reveal the locations of the country's chemical weapons arsenal.

Speaking to a television channel, Muallim said Syria was willing to give up its chemical weapons arsenal by explaining, "Damascus wants to join the Non Proliferation Treaty and is ready to implement Russia's proposal."

Muallim also said that the country welcomed Russia’s suggestion that it should place its chemical weapons under international control – a move designed to avoid possible US air strikes.