"We hope to come out top in these European elections which would obviously send shock waves because it would call into question the whole structure of Europe," Le Pen said 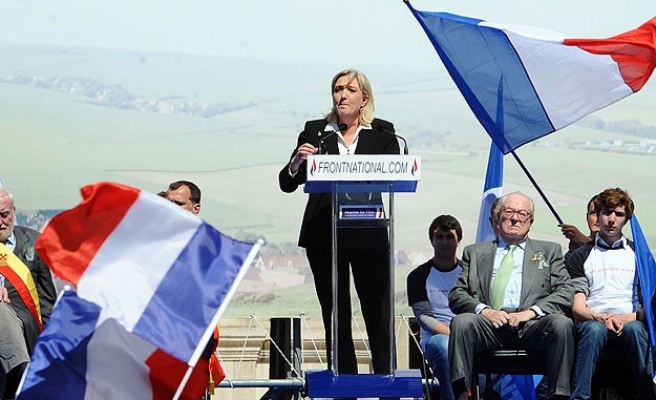 Fresh from March's successful municipal elections when her anti-EU party secured power in 10 town halls across France, Le Pen has sought to capitalise on growing discontent over Socialist President Francois Hollande's handling of the economy and rising unemployment that he has been unable to stem.

Mainstream centre-left parties are facing the same problem across the 28-nation European Union - a disenchanted industrial proletariat that has borne the brunt of globalisation and the financial crisis is being drawn to the political extremes.

"On May 25, put an end to this system that despises you ... turn your back on the dishonour and capitulation," Le Pen, a fiery ex-lawyer, told thousands of supporters gathered in central Paris for the May Day holiday.

"No to Brussels, yes to France. Do not fall into the trap of abstention. Do not disappoint me, go and vote!"

Surveys in recent weeks place her National Front in a straight fight with the mainstream conservative UMP for first place in the elections, with both parties distancing the Socialists.

Highlighting the National Front's rising popularity, between 5,000 and 20,000 people - with the low and high estimates given by police and organisers respectively - attended its May Day rally. Le Pen launched the event by laying a wreath at a golden statue of mediaeval heroine Joan of Arc.

"We hope to come out top in these European elections which would obviously send shock waves because it would call into question the whole structure of Europe," Le Pen told Reuters amid a flurry of French flags and chants of the national anthem.

Le Pen came third in the 2012 presidential election with about 18 percent of the vote. She has since sought to attract more voters by shifting from the National Front's traditional anti-immigration emphasis to leaving the euro and imposing protectionist barriers, to exploit discontent over the debt crisis in Europe and globalisation.

Thousands took part in a march headed up by Le Pen and her father Jean-Marie - the firebrand former leader of the party now given the title of "Honorary President".

The pair were joined by National Front mayors elected in municipal elections in March which saw the party take a number of towns including Henin-Beaumont, Beziers and Frejus.

The National Front is among a number of anti-EU parties forecast to do well in the EU elections. Le Pen said her party's recent success was part of that popular movement sweeping through the union.