A phone conversation in which a top US diplomat disparages the EU over the Ukraine crisis has been revealed. 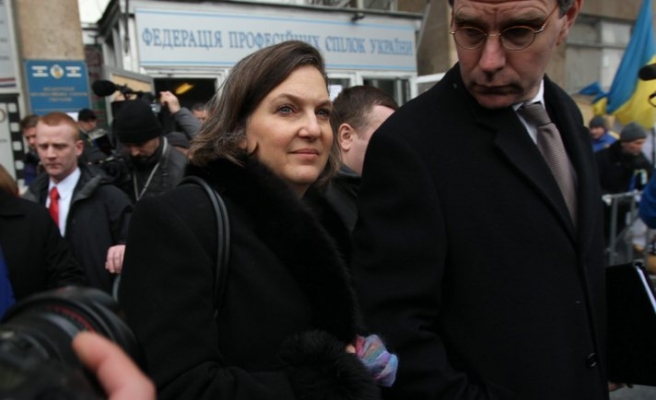 A conversation between a State Department official and the U.S. ambassador to Ukraine that was posted on YouTube revealed an embarrassing exchange on U.S. strategy for a political transition in that country, including a crude American swipe at the European Union.

The leaked conversation appeared certain to embarrass the United States and seemed designed to bolster charges - from Russia, among others - that the Ukrainian opposition is being manipulated by Washington, which US President Barack Obama's administration strenuously disputes.

The audio clip, which was posted on Tuesday but gained wide circulation on Thursday, appears to show the official, Assistant Secretary of State Victoria Nuland, weighing in on the make-up of the next Ukrainian government.

Nuland is heard telling U.S. Ambassador Geoffrey Pyatt that she doesn't think Vitaly Klitschko, the boxer-turned-politician who is a main opposition leader, should be in a new government.

Separately on Thursday, a senior Kremlin aide accused the United States of arming Ukrainian "rebels" and warned Russia could intervene to maintain the security of its neighbor.

U.S. officials, while declining to confirm the recording's contents, did not dispute its authenticity.

"I did not say it was not authentic," State Department spokeswoman Jen Psaki said at a news briefing.

Psaki also criticized Russian officials' publicizing of the tape as "a new low in Russian tradecraft" and denied Washington was trying to meddle or engineer a particular outcome in Kiev.

"Absolutely not," she said. "It should be no surprise that U.S. officials talk about issues around the world. Of course we do. That's what diplomats do."

The floating of the audio is an ironic turnabout of sorts for the United States, which snooped on the leaders of allied nations, according to classified documents made public by former National Security Agency contractor Edward Snowden.

The audio posted on YouTube, along with a second one that captures a reported conversation between senior EU diplomats, reveal apparent rifts between the United States and EU over how to handle Ukraine.

Nuland referred to getting the United Nations involved in a political solution in Kiev.

"So that would be great, I think, to help glue this thing and have the U.N. help glue it and you know ... f..k the EU," she said in the recording, which was accompanied by still pictures of people mentioned in the call.

Pyatt responded: "Exactly. And I think we've got to do something to make it stick together because you can be pretty sure that if it does start to gain altitude, the Russians will be working behind the scenes to try to torpedo it."

Psaki said Nuland had apologized to her EU counterparts for the reported comments.

The date of the conversation was not specified but the events it describes appeared to have taken place in the last days of January.

The second recording, purporting to be a conversation between two EU officials, was posted on the same day from the same YouTube account, which has previously carried video showing protesters in a poor light.

In it, Helga Schmid, deputy to EU foreign policy chief Catherine Ashton, is heard complaining about U.S. criticism that the Europeans are not supporting sanctions on Ukrainian individuals in response to violence against anti-government protests.

"It's very annoying that the Americans are going around criticizing the EU and saying we are too soft," Schmid tells Jan Tombinski, the EU ambassador to Ukraine.

A spokeswoman for Ashton said the EU would not comment on a "leaked alleged" conversation.

The simultaneous release of the recordings appeared designed to both discredit the Western powers' involvement in Ukraine and, possibly, to drive a wedge between Brussels and Washington.

Nuland met on Thursday with Ukrainian President Viktor Yanukovich to discuss a solution to anti-government protests that have swept the former Soviet republic since November. They discussed political reform and possible further negotiations between Yanukovich and opposition leaders, his website said.

Yanukovich later flew to Sochi, Russia, where the Winter Olympics are due to open on Friday evening. He was expected to meet there with Russian President Vladimir Putin.

Posted anonymously, the first audio clip was headlined "Puppets of Maidan" - clearly aiming to portray opposition leaders as stooges of the U.S. diplomats, who were discussing how the opposition might take up an offer from Yanukovich to form a government.

"Maidan," the Ukrainian word for "square," serves as the name of the whole protest movement that started in Kiev's central Independence Square in November. Critics of Yanukovich have been occupying the square nonstop ever since.

There was no immediate comment from Moscow, but the recording clearly plays into Russian accusations that the West is meddling in Ukraine. Russia sees Ukraine as being within its sphere of influence and has offered the cash-strapped Kiev a $15 billion bailout to keep it in its orbit.

Protests began when Yanukovich spurned an EU trade agreement last year in pursuit of closer ties with Russia. Protesters have since taken over public buildings and staged mass rallies, sometimes clashing violently with police, in the capital Kiev and other cities.

"I think (Yatseniuk) is the guy who's got the economic experience, the governing experience. What he needs is (Klitschko) and (Tyahnybok) on the outside. He needs to be talking to them four times a week," Nuland said in the recording.

"I think you reaching out directly to him helps with the personality management among the three and it gives you also a chance to move fast on all this stuff and put us behind it before they all sit down and he explains why he doesn't like it," he said.