In search for better life refugee children forced to 'witness death of their loved ones, including parents, relatives and friends' 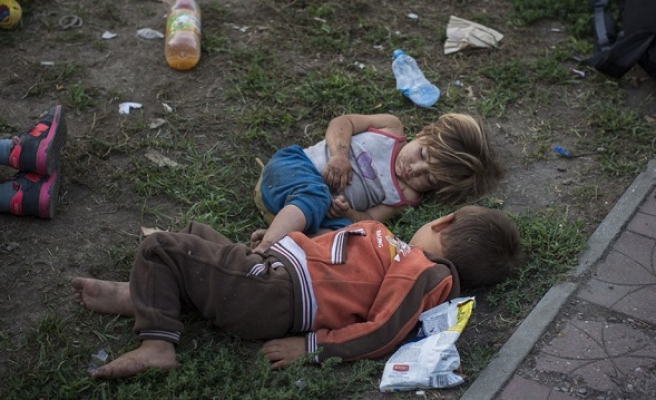 Photos showing Palestinian and Syrian children washed ashore in Libya and recent images of children lying dead on the shores of Turkey have been the most striking evidences of growing refugee crisis and disappointing response to it from European authorities.

According to the UN, almost half of refugees come from Syria trying to flee from the devastating civil war. Sweden, United Kingdom, France and Germany are among favourite destination points for those who are left with no other choice than to try escape war. Nevertheless, they may not receive the expected greetings; in Macedonia and Hungary they may be teargassed, and if they get to Germany or Denmark their shelters may well be torched.

Yet the hardest this journey is for families with children, and especially the refugee children themselves.

In April 2015 report, Save the Children warned number of children casualties may reach to 2,500 in Mediterranean this year. Human Rights Watch (HRW) said, there are many unaccompanied children refugees fleeing their war-torn countries. The human rights group stated that in 2014, out of 6,100 refugee children that reached Greece, around 1,100 were registered as unaccompanied or traveling without family members.

Apart from running away from wars, the main reason for children to take the journey at early ages is fleeing recruitment as soldiers and escaping child marriage.

According to Telegraph, after arriving in Italy in smugglers’ boats, more than 5,000 refugee children have disappeared without a trace in 2015. Many of them feared to encounter exploitation and prostitution.

HRW says number of children refugees are probably higher than estimated. Many children traveling alone claim to be 18 in order to avoid prolonged detention they face while authorities find proper shelters for them.

While the influx of refugees into Europe continues despite all the dangers and difficulties, the European leaders have so far failed to agree on the responsibility share as both German Chancellor Angela Merkel and French President Francois Hollande called for a "fair distribution."

"The responsibility of EU states starts even before refugees reach their border — it starts in the middle of the Mediterranean, where thousands of children have witnessed the death of their loved ones, including parents, relatives and friends," said Carolyn Miles, president of Save the Children.

UN human rights expert, Francois Crepeau, believes EU's efforts to push back refugees is vain. "Let's not pretend that what the EU and its member states are doing is working," he said.