About 400 people attend PEGIDA march, while 2,000 gather in anti-PEGIDA rally 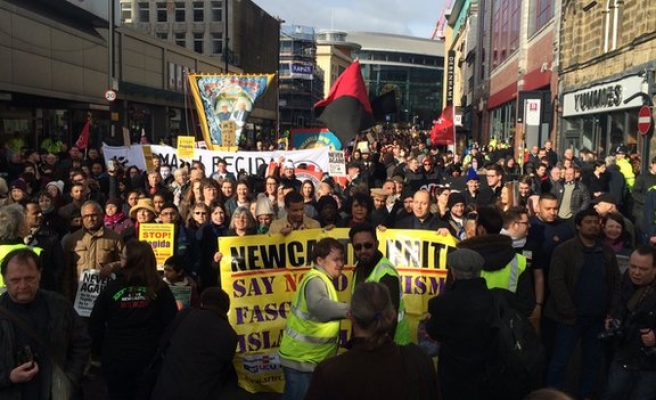 World Bulletin / News Desk
Two protests were held Saturday in Newcastle, northeast England: one by the far-right movement Patriotic Europeans Against the Islamization of the West, also known as PEGIDA, and a larger one against PEGIDA.

About 400 people protested against what the call the “Islamization of the West,” a protest organized by the U.K. branch of the German far-right movement established in 2014.

The march was called by “PEGIDA ENGLAND” Facebook page, which has more than 17,000 followers and attendance was expected to be around 800 people.

On the other hand, about 2,000 people attend an anti-PEGIDA protest, which was held in Newgate Street of Newcastle.

People were holding banners that said “Stop PEGIDA, no to Islamophobia and Racism” and “Newcastle united against racism, fascism and Islamophobia.”

Security forces were deployed in the region in order not to have clashes between the two groups of protesters. Police detained five PEGIDA supporters for attempting to cause commotion.

PEGIDA organized protests in Norway, Denmark and Sweden on Jan. and Feb. 2015, with low turnouts. Hundreds of people also took part in counter-demonstrations against the events.