Tens of thousands marched in Madrid on Saturday in the biggest show of support yet for anti-austerity party Podemos, whose surging popularity and policies have drawn comparisons with Greece's new Syriza rulers. 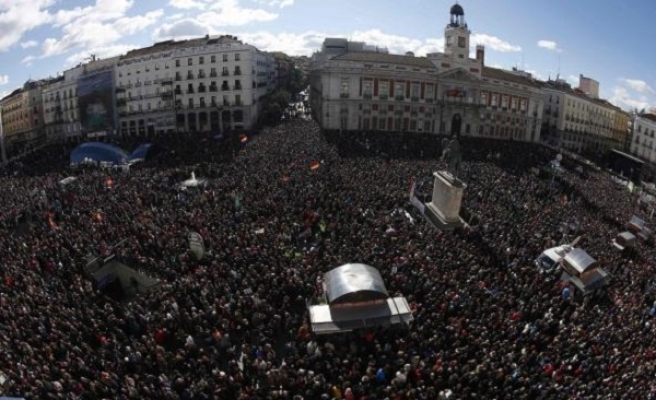 Over a hundred thousand people have massed Saturday in left-wing Podemos’ “March for change” rally in Madrid, Spain.

Podemos (We Can), the popular movement-turned-political party was formed in January this year by former lecturer of Political Science at Madrid University, Pablo Iglesias.

Iglesias, a European Parliament member, hailed Saturday’s rally as "historic," saying that beginning from today the political change in Spain has begun.

“Change may happen,” Iglesias said, addressing the marchers. “Greece has shown that.”

“We are building the dream of a better country,” he said. “But we did come to the square to dream.  On the contrary, we came here to realize our dreams.”

The 36-year-old leader said his party wants “a Europe ruled by citizens.”

“Who said you can’t? In Greece, Syriza succeeded. In Greece, there is already a government working for citizens, serious and responsible," he said.

Iglesias, who is against austerity policies, said that “sovereignty and the homeland are not for sale.”

“This is not a rally of Podemos supporters, but of all Spanish people who want change,” Errejon said, adding that “Spanish people want fresh politics in the country.”

“They do not want interruptions in health and education,” he said. “Podemos is ready to come to the power in Spain.”

Spain is due to hold local elections in May.

Many Greek flags and those of its new ruling party Syriza were seen in the rally, which according to the police gathered more than a hundred thousand people.

Syriza who won the Jan. 25 elections in Greece, is known as a close ally for Podemos, with both parties winning public support following the heavy economic crisis that has hit Eurozone, especially Greece and Spain, since 2008.

Slogans against German chancellor, Angela Merkel, known as the leader behind the austerity policies in Europe, were heard.

Podemos received about 8% of national vote in the 2014 European Parliament elections, but the recent polls show it coming first, followed by the ruling People’s Party.

Spanish Prime Minister Mariano Rajoy has accused Podemos of drawing a bleak image of Spain. Rajoy said that Podemos would not succeed.

Spain officially registered the first positive economic year in 2014 since the crisis.