Several hundred refugees staged a protest at the border on Sunday, sitting and lying with their children across the train tracks 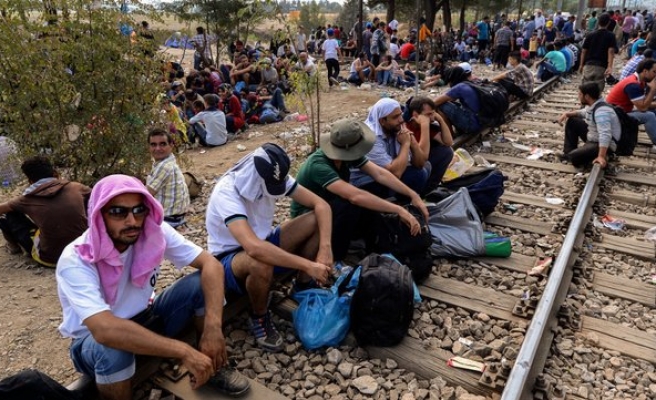 Stranded refugees lay with their children on rail tracks at Greece's northern border Sunday, demanding to be allowed to continue their journey, as Germany warned that Europe cannot let the country "plunge into chaos".

German Chancellor Angela Merkel was speaking as Athens said that the number of refugees trapped in Greece could triple after Balkan countries announced a daily cap on refugee arrivals.

Tensions between European nations worst affected by the refugee crisis are running high, with Austria's Chancellor Werner Faymann accusing Greece of "behaving like a travel agency" for refugees hoping to start new lives elsewhere in Europe.

"We estimate that in our country the number of those trapped will be from 50,000-70,000 people next month," Greek Migration Minister Yiannis Mouzalas said in an interview with Mega TV, up from 22,000 at present.

"Do you seriously believe that all the euro states that last year fought all the way to keep Greece in the eurozone -- and we were the strictest -- can one year later allow Greece to, in a way, plunge into chaos?" she said in an interview with public broadcaster ARD.

Some 6,500 refugees remained stuck in a camp at Idomeni on Greece's border with Macedonia, unable to move on after Macedonia and Serbia, as well as EU members Slovenia and Croatia, imposed a daily limit of 580 refugee entries.

Several hundred refugees staged a protest at the border on Sunday, sitting and lying with their children across the train tracks.

Some held up handwritten posters that read "Open the borders, no food" and "We are humans, not animals".

"I'm 17 days on the road with my family and my two children. I don't know what to do," one Syrian man told Athens News Agency as he lay across the tracks with his children.

The build-up at the Idomeni camp, which can hold up to 1,500 people, began in earnest last week after Macedonia began refusing entry to Afghans and imposed stricter controls on Syrians and Iraqis.

The Balkan clampdowns come hot on the heels of a move by Austria, further up the refugee trail to Germany and Scandinavia, to introduce a daily cap of 80 asylum applications and a limit of just 3,200 refugees transiting through per day.

The controls have had a knock-on effect in Greece, where refugees have continued to arrive en masse by boat from Turkey.

Merkel said of eastern European countries that have tightened their border controls: "The problem is that they acted independently and unilaterally, but it's not good if a country is not involved."

"Greece was simply left on the outside."

The tension has resulted in a public spat, with Austria accusing Greece of failing to adequately police its borders under its duty as the southeastern flank of Europe's Schengen passport-free zone.

Chancellor Faymann compared Greece to a "travel agency" for refugees, adding in remarks to Austrian media: "Last year, Greece took in 11,000 asylum seekers, we took in 90,000. That can't be allowed to happen again."

But Mouzalas said Austria's politicians were talking with one eye on the electoral calendar: a presidential poll is due in April.

"Austria is a friendly country. They have reacted this way because of course they have accepted many refugees but also because elections are on the way," he told Mega TV.

Mouzalas said he expected the influx to slow when the information about closed borders spread in Turkey, where more than two million people fleeing the war in Syria have taken refuge.

He said the campaign, alongside a NATO operation in the Aegean Sea helping to police Greek waters, was expected to reduce arrivals by 70 percent.

Pope Francis used his weekly address on Sunday to hail the "generous help" offered by Greece to refugees and to urge European countries to work together to "share the burden fairly".

In Italy, authorities are making preparations in case the border closures redirect the refugee flow towards the southeastern province of Puglia, which lies across the Adriatic Sea from Albania.

Coastguards and customs officials are patrolling the 300-kilometre (180-mile) coastline, which has numerous secluded beaches where boats can land discreetly.

"Our goal is to make the procedures more efficient and faster," he said in emailed responses to written questions from AFP.

De Maiziere was due to begin a visit to Morocco, Algeria and Tunisia -- nations that would be declared safe countries of origin under a proposed new German law, making it easier to send back failed asylum seekers.