Medvedev told parliament Russia would insist on fair access to foreign markets for its energy exports and would, if necessary, take legal action or seek arbitration at the World Trade Organisation 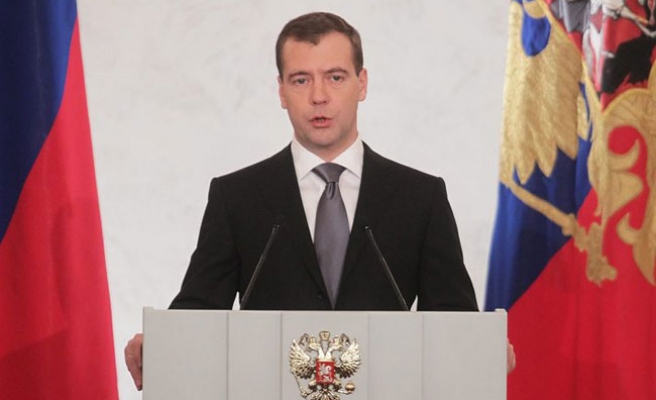 Russia, under threat of further sanctions over the Ukraine crisis, said on Tuesday it could minimise their impact and would support industries dependent on supplies from abroad.

Prime Minister Dmitry Medvedev told parliament sanctions were a chance for Russia to reduce its dependence on imports and that its economic priorities were unchanged.

"We shan't give up on cooperation with foreign companies, including from Western countries, but we will be ready for unfriendly steps," he said in a report to lawmakers on the government's work in 2013.

"I am sure we can minimise their impact," he said. "We will not allow our citizens to become hostages of political games."

The United States and the European Union have imposed visa bans and asset freezes on a number of Russian individuals since Russia annexed Ukraine's Crimea region last month.

Washington has said further sanctions could be imposed "within days" if Russia does not take steps to implement an international accord, signed in Geneva last week, which was meant to defuse the crisis.

Medvedev said some Russian banks had been shut out of international payments systems.

"This is no doubt a violation of existing agreements with these systems. I believe that this must not go unpunished," he said, adding it was a stimulus to creating a national payments system.

Medvedev said Russia was more interested than ever in diversifying its gas exports and described talk of Europe importing U.S. gas to reduce reliance on imports from Russia as "a bluff". A third of Europe's gas comes from Russia.

The prime minister said Russia would seek to counter sanctions through a pivot towards Eastern markets.

"We shall not reduce economic ties but, if our Western partners make that mistake, intensive work in other markets will reduce the losses," he said, adding the Russia was developing cooperation with countries of the Asia-Pacific region and with India and China, among others.

Medvedev also told parliament that, irrespective of sanctions, Russia would insist on fair access to foreign markets for its energy exports and would, if necessary, take legal action or seek arbitration at the World Trade Organisation.