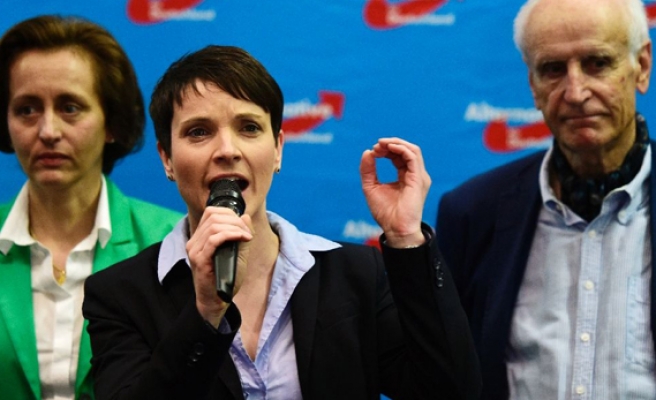 German Chancellor Angela Merkel was facing fresh pressure Monday over her liberal refugee policy after a drubbing in regional elections described as a "debacle".

Merkel's Christian Democratic Union (CDU) was at the receiving end of voter anger, suffering defeats in two out of three states in Sunday's elections -- including in its traditional stronghold Baden-Wuerttemberg.

The stinging result for the conservative CDU was accompanied by a surge in backing for the right-wing populist Alternative for Germany (AfD), which had sparked outrage by suggesting police may have to shoot at migrants to stop them entering the country.

The elections were the biggest since Germany registered a record influx of refugees that reached 1.1 million in 2015, and largely regarded as a referendum on Merkel's decision to open the doors to people fleeing war.

While they have no direct impact on her chancellorship, the regional polls in the southwestern states of Baden-Wuerttemberg and Rhineland-Palatinate as well as Saxony-Anhalt in the east served as a key test ahead of general elections in 2017.

The mass-circulation Bild newspaper described it as a "day of horror" for Merkel.

Merkel, who is expected to give her first reaction to the polls shortly after midday, has so far resolutely refused to impose a cap on refugee arrivals, insisting instead on common European action that includes distributing asylum seekers among the EU's 28 member states.

But Sunday's results could strengthen the hand of her adversaries, including strident critics within her Bavarian allies, the CSU.

The main reason for the poor CDU showing "is the refugee policy. It makes no sense at all," CSU chief Horst Seehofer said at a party meeting on Monday, according to national news agency DPA.

Demanding a change in refugee policy, Seehofer said: "It can't be that after such an election result, the answer to the electorate is: everything will go on as before."

Beyond Germany, Merkel also risks isolation at a meeting of EU leaders opening Thursday, when they will seek to finalise a deal with Turkey on stemming the migrant influx.

Merkel has criticised a decision by Balkan states to close their borders to refugees, but Bavarian daily Nuernberger Nachrichten noted that "she is benefiting more than anyone from the border closures that she is criticising".

"After this election, Merkel must, more than ever, give an explanation."

The German press said the results delivered a clear message to Merkel.

"The grand coalition on Sunday received the bill for its refugee policy, which has polarised Germany," the Frankfurter Allgemeine Zeitung said.

Spiegel Online described it as "Black Sunday for the CDU".

"For a long time (Merkel) had hoped, despite all the opposition to her refugee policy, to grab the two state premierships in the southwestern states. That's not happening,"  Spiegel said in an editorial.

"Merkel will now have to live with the accusation that she has allowed the AfD to establish itself to the right of the CDU."

For most of the last decade, Merkel has enjoyed stellar popularity ratings as she pushed a middle-ground politics.

Although her strategy has allowed her party to win over some ground from the centre-left Social Democrats, critics say it has left its right flank exposed.

In Sunday's vote, the AfD captured seats into all three states and gained as much as one in four votes in the eastern state of Saxony-Anhalt, emerging as the second biggest party. In Rhineland-Palatinate, it rose to become the third largest.

Nevertheless, the irony is that Sunday's polls also once again showed there is no obvious successor to Merkel, as the CDU's biggest mainstream challenger and junior coalition partner -- the Social Democratic Party -- was severely weakened, coming in behind AfD in two out of three states.

And Julia Kloeckner, who some believed could be the successor to Merkel, failed to help the CDU to a win in Rhineland-Palatinate.

Even Seehofer acknowledged that Merkel was still the right chancellor, while the Frankfurter Allgemeine Zeitung questioned who had the clout to force the German leader to reverse her stance on refugees.

"The party has less choice than ever" for its succession, it noted.