Opinion polls show Chancellor Merkel's CDU/CSU alliance in the lead, but the composition of Germany's next coalition government is far from certaine 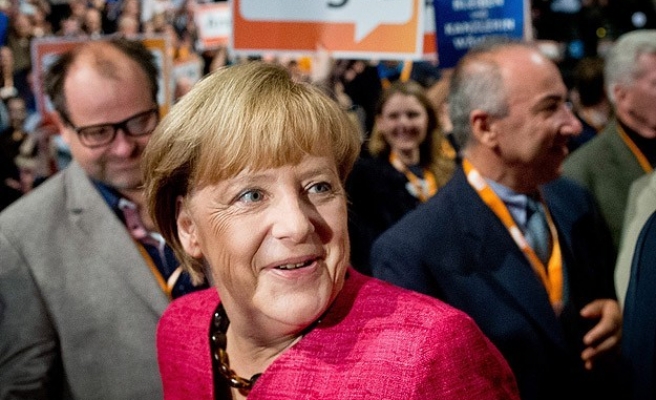 German voters head to the polls on Sunday and are expected to hand Chancellor Angela Merkel a third term in office, but the composition of the future coalition government remain far from clear.

Various other polls also suggest that event if the FDP crosses the election threshold, conservatives and liberals may not to gain the majority of the seats at the federal parliament, or Bundestag.

If the FDP fails to get a support rate of 5 percent, or the two partners fail to get a majority at the federal parliament, Merkel's conservative alliance may be forced to form a coalition with the center-left SPD.

Grand Coalition not an easy option

Social Democrats declared earlier that the party's preferred coalition partner would be the Greens, and they are widely expected to insist on their key demands for establishing a “Grand Coalition” with the conservative Christian Democrats.

Between 2005 and 2009, CDU/CSU alliance and the SPD formed a Grand Coalition government. But this time SPD has declared that it would first ask the approval of the party delegates before starting negotiations for forming such a coalition.

Unlike the previous election campaigns, this time Turkey’s EU process was not among the hotly debated issues. But the Euro crisis and the growing popularity of a new Eurosceptic movement shows that headaches await Merkel in her new term.

The seven month old Alternative for Germany (AfD) party demands an orderly dismantling of the Eurozone and for Germany, returning to the Deutsche Mark.

Polls show Alternative for Germany (AfD) on 4 percent but its growing popularity in internet and social media shows that it can cross the 5 percent threshold, which would risk CDU/CSU alliance and FDP’s majority in the federal parliament.

Despite the Eurozone's long-running sovereign debt crisis the German economy continued to grow in the last three years. Germany's unemployment rate – around 6.8 percent in August – is near its lowest in two decades.

But opinion polls show high levels of opposition, with German voters to the Eurozone rescue packages that worth hundreds of millions euros. Germans are also complaining about the high tax rates in the country.

34 parties will take part in Sunday’s election and 4,451 candidates are running for seats at the federal parliament, including 1,149 women.

Around 100 candidates with migration background, 66 of them of Turkish origin are standing for election on Sunday. 10 of them have a solid chance of securing a seat in the Bundestag, or federal parliament.

61.8 million German citizens are eligible to vote. Among them 5 million voters are with immigration background. The number of German-Turkish voters is estimated to be around 700,000.

About 3 million young Germans will be voting for the first time in Sunday’s election. 3.6 percent of the voters are aged between 18-21.

Each voter has two votes in the elections to the German Bundestag. The first vote, allows voters to elect their local representatives from the constituencies. The second vote is cast for a party list.

The first exit polls will be released by public television stations ARD and ZDF at 6 p.m.