Merkel tells Putin to 'use influence' on Ukraine separatists 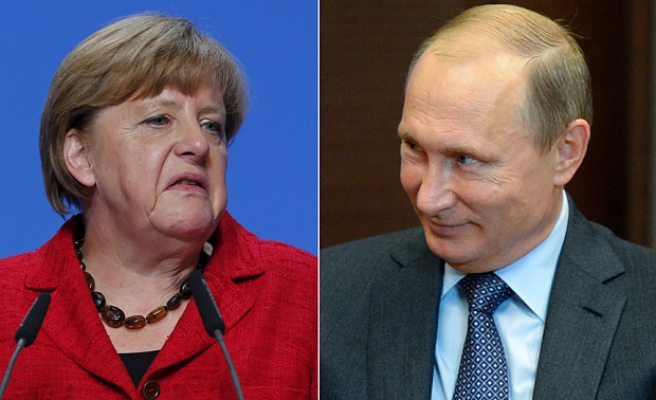 Chancellor Angela Merkel on Tuesday urged Russian President Vladimir Putin to use his influence to rein in pro-Kremlin rebels in eastern Ukraine, a day after the German leader warned that a peace deal was not being fully implemented.

During a phonecall, Merkel "made it clear to President Putin that in order to obtain further progress towards a comprehensive political solution", a ceasefire had to be respected and unfettered access given to observers monitoring the truce.

"Here, Russia must use its influence on the separatists," she said, according to a statement issued by her spokesman.

The conversation came a day after Merkel hosted Ukraine's President Petro Poroshenko for talks, with the Ukrainian leader accusing Russia of continuing to send troops and weapons into his country in violation of a ceasefire deal.

Kyiv and Moscow finalised the peace accord brokered by France and Germany in the Belarus capital of Minsk last February, but sporadic clashes still took place on the frontline.

Poroshenko blamed "Russia and its proxies" for the violence, saying they have failed to observe the ceasefire and were responsible for 1,200 shellings in January alone.

He also said observers from the Organisation for Security and Cooperation in Europe (OSCE) were being denied access to the border.

Kyiv and the West have accused Russia of supporting the insurgency and sending regular troops across the border.

But Putin has repeatedly denied playing any direct role in a war that began less than two months after the ouster of Ukraine's Kremlin-backed president.

More than 9,000 people have been killed and 20,000 injured in the conflict in Ukraine since April 2014, according to the United Nations.