Merkel urges Kyiv to press on with painful reforms

Merkel says Ukraine is already on 'this courageous road', and that she is aware of 'how difficult it is' to pass much-needed reforms 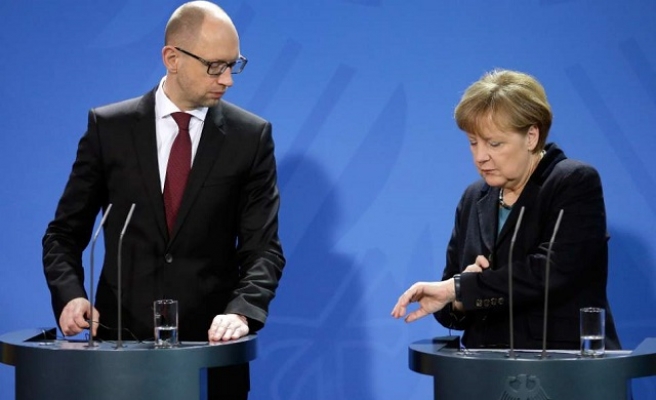 German Chancellor Angela Merkel Friday urged Ukraine to press on with painful reforms, as Kyiv battles to haul the economy out of recession.

"An essential condition to enlarging the economic relations (between Germany and Ukraine) is that the Ukrainian government must remain on its road of reforms," she said at an economic conference in Berlin also attended by Ukraine's Prime Minister Arseniy Yatsenyuk.

Merkel said Kyiv was already on "this courageous road", and that she was aware of "how difficult it is".

Battered by a separatist war in its eastern industrial heartland since April last year, Ukraine's economy is expected to contract a huge 12 percent in 2015, according to the World Bank.

The country has secured a bailout worth $17.5 billion over four years from the International Monetary Fund, but only in exchange for drastic measures by the government to restore public finances.

Harsh austerity by the government, including sharp hikes in utility bills and caps on pensions, coupled with the unresolved conflict in the east, have sent public morale and the government's popularity to a low.

Opinion poll ratings for Yatsenyuk's party were as low as just two percent on Friday, two days before the country is due to hold regional elections in areas under its control.

Giving a glimpse of Ukraine's potential, Merkel noted that Germany is one of the country's biggest trading partners but with trade reaching just 5.2 billion euros in 2014 she said: "That's still below what is possible."

Merkel also stressed that an EU association agreement signed with Kyiv in 2014 was "not directed against Russia".

Moscow had annexed the Crimea peninsula in March last year after the deal, furious at Kyiv's tilt to the West.

But Merkel said she wants Kyiv to maintain good economic relations with both the EU and Russia.