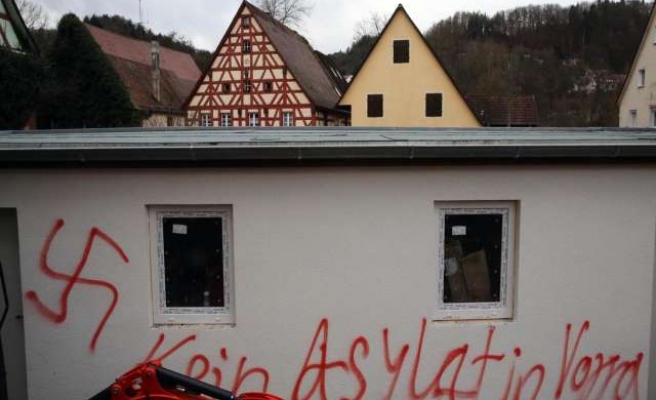 German opposition parties have accused Chancellor Angela Merkel’s Christian Democrat bloc of creating an anti-immigrant political climate that has resulted in a growing number of attacks on buildings housing refugees.

Three buildings, which were to host refugees in the southeastern German town of Vorra, were burned down on Thursday night in what police suspect was an arson attack by neo-Nazis. The suspects painted swastikas on the wall of a nearby building. The Bavarian police tasked a special team on Saturday to identify the perpetrators.

Riexinger criticized Merkel’s Christian Democratic Union and its sister party the Christian Social Union for adopting anti-immigrant rhetoric and not clearly distancing themselves from the recently formed anti-immigrant and anti-Islam movements which have seen growing support.

Recently formed right-wing and anti-Islam platforms like PEDISA and HOGESA have gathered thousands in protests organized in cities such as Dresden, Hannover and Cologne in the last two months.

Patriotic Europeans against the Islamization of the West, or PEDISA, started weekly rallies in Dresden in October, with the participation of nearly 500 demonstrators.

In its latest demonstration on Dec. 8, some 10,000 protestors rallied chanting anti-immigration and anti-Islam slogans.

Several leading politicians from Merkel’s Christian Democrat bloc have criticized right wing extremists, but also argued that one should address the concerns and fears of others who are joining in these demonstrations.

Anton Hofreiter, the parliamentary group leader of the opposition left-wing Green Party, has particularly criticized Merkel’s coalition partner CSU for contributing to an anti-immigrant climate in the past weeks and months.

“The recent suspected right-wing arson attack on refugee houses in Worra should shake the CSU awake,” he said Saturday, warning the party against drifting into right-wing populism.

The CSU has long been critical of immigration and accused many asylum seekers coming from Balkans and immigrants from Bulgaria and Romania of exploiting social benefits available in Germany.

The CSU, which is also ruling the state of Bavaria, sparked a debate last week by its proposal to oblige immigrants to speak German both in public and with their families at home to encourage what he claimed was “successful integration.”

Following widespread criticism, the CSU revised the text on Friday and argued that those who want to live in Germany permanently “should be motived to speak German in daily life.” The motion was adopted on Friday at the party congress in Nuremberg.

At a party congress on Saturday, CSU Chairman and prime minister of the state of Bavaria, Horst Seehofer, repeated the successful integration line, saying: “Integration can only be successful when one is ready to learn and also practice the language of the host country.”

He also said that there was “no place for religious extremism” in Bavaria, maintaining that the Bavarian administration would closely monitor the Salafist scene for the “protection of our people.”

Both Merkel’s CDU and its sister party the CSU feel threatened by the growing support for populist parties and movements.

The party won seven seats in the European Parliament elections in May and entered state parliaments in Saxony, Brandenburg and Thuringia during 2014.

Germany has witnessed a rise in anti-immigration and anti-Islam sentiments in recent months, raising worries among politicians.

A recent poll carried out last week by Germany’s public-service television broadcaster, ZDF, revealed that a large majority of the German public has skeptical and negative attitudes towards immigrants.

Around 20 percent of residents in Germany have a migrant background, according to latest figures from the Federal Statistics Office.

About 9.7 million of them have become German citizens, while 6.8 million immigrants have kept their former nationalities.